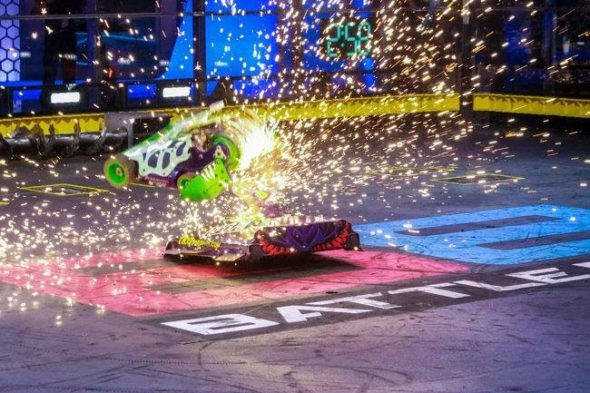 The robots will keep duking it out. Discovery Channel has renewed the BattleBots TV series for seasons six and seven which means there are 80 hours of new action on the way. In addition, BattleBots will stage its 2021 World Championships beginning next month in Las Vegas.

Here are some additional details from Discovery:

BATTLEBOTS, THE WORLD’S PREMIER ROBOT COMBAT COMPETITION, GETS PICKED UP BY DISCOVERY FOR TWO SEASONS WITH AN UNPRECEDENTED 80 HOURS OF ROBOT-FIGHTING ACTION

2021 World Championships Set to take place This Month in The Fight Capital of The World, Las Vegas, With Tickets Available Now

(LOS ANGELES) – BattleBots, the world’s premier robot combat competition, is about to become even bigger than before. Today, Discovery announced it has picked up an additional two seasons of BattleBots, totaling an unprecedented order of 80 hours of robot-crunching action.

In another major move, BattleBots will stage its 2021 World Championships beginning next month in the fight capital of the world, Las Vegas. The iconic BattleBox fight arena has been completely reimagined for the new seasons with extra hazards for the robots – generating even more tension and excitement for viewers.

In addition, the 2022 Championships will also be held in Vegas during the summer of 2022. All the bot-breaking action will play out in front of a live audience of dedicated BattleBots fans from around the world at Caesars Entertainment Studios. The new season will air later this year on Discovery.

“I can’t wait to once again hear the iconic opening words, ‘It’s robot fighting time!’ as announced by Faruq across Discovery platforms,” said Scott Lewers, EVP Multiplatform Programming Discovery Factual & Head of Content, Science. “Vegas is one of the few places in the entire world that can match the adrenaline and fun of this competition and I’m thrilled it will be the backdrop to host these incredibly talented robot designers, builders, and fighters.”

“Standby Vegas! – the bots are on their way from all over the world,” said Trey Roski, BattleBots creator. “This is the most exciting development for the sport; to have a multi-year commitment from a broadcaster is what we’ve always wanted to enable our talented builders to have time to plan and design even more ferocious and imaginative robots for the future. It’s a great day for BattleBots, and we’re delighted to have such a supportive partner as Discovery. Since BattleBots started 21 years ago, I’ve always dreamed that Vegas would be the ideal permanent home for the sport. Now thanks to Discovery and Caesars we’re achieving that goal.”

“The best builders in the world, the best robot combat action, the most talented production and broadcast teams, the best platform partners in Discovery, and now the perfect host in Vegas – what’s not to love about this deal? Our fans will go bonkers! The most entertaining combat sport on the planet is thriving,” said Chris Cowan, Head of Unscripted TV at Whalerock Industries.

More than 65 teams will travel to Las Vegas with their fighting machines to slug it out in a series of battles to the death. The ultimate winner will take home the greatest prize in the sport: The Giant Nut, which is currently held by End Game from New Zealand.

The competition this year will be fierce. Teams from across America will compete against rivals from Europe, Asia and South America with the hope of bringing the Giant Nut back to the USA. Former title holder Tombstone will be in the field, along with current World Champion End Game. Fan favorites Witch Doctor, SawBlaze, Hydra, Whiplash and Valkyrie will also fight to hoist the Nut, while Backsmith, Minotaur, DUCK! and Icewave will hope for triumphant returns after missing the 2020 season.

Sportscaster Chris Rose and UFC fighter Kenny Florian will return once again to provide play-by-play commentary, along with expert contributions from Pete Abrahamson, a.k.a. The Bot Whisperer. Meanwhile, Faruq Tauheed returns to the BattleBox as Ring Announcer.

Audiences are invited to watch the robot fighting action from BattleBots’ new home in Las Vegas, where BattleBots will tape from August 23 – September 4 at Caesars Entertainment Studios.

Tickets are available now for the public ($40-$125) and can be purchased by visiting the BattleBots ticketing page.

About discovery+
discovery+ is the definitive non-fiction, real life subscription streaming service. discovery+ features a landmark partnership with Verizon that gives their customers with select plans up to 12 months of discovery+ on Verizon. discovery+ has the largest-ever content offering of any new streaming service at launch, featuring a wide range of exclusive, original series across popular, passion verticals in which Discovery brands have a strong leadership position, including lifestyle and relationships; home and food; true crime; paranormal; adventure and natural history; as well as science, tech and the environment, and a slate of high-quality documentaries. For more, visit discoveryplus.com or find it on a variety of platforms and devices, including ones from Amazon, Apple, Google, Microsoft, Roku and Samsung.

About Discovery Channel
Discovery Channel is dedicated to creating the highest quality non-fiction content that informs and entertains its consumers about the world in all its wonder, diversity and amazement. The network, which is distributed to 100.8 million U.S. homes, can be seen in 224 countries and territories, offering a signature mix of compelling, high-end production values and vivid cinematography across genres including, science and technology, exploration, adventure, history and in-depth, behind-the-scenes glimpses at the people, places and organizations that shape and share our world. For more information, please visit www.discovery.com

About Discovery Communications
Discovery, Inc. (Nasdaq: DISCA, DISCB, DISCK) is a global leader in real life entertainment, serving a passionate audience of superfans around the world with content that inspires, informs and entertains. Discovery delivers over 8,000 hours of original programming each year and has category leadership across deeply loved content genres around the world. Available in 220 countries and territories and nearly 50 languages, Discovery is a platform innovator, reaching viewers on all screens, including TV Everywhere products such as the GO portfolio of apps; direct-to-consumer streaming services such as discovery+, Food Network Kitchen and MotorTrend OnDemand; digital-first and social content from Group Nine Media; a landmark natural history and factual content partnership with the BBC; and a strategic alliance with PGA TOUR to create the international home of golf. Discovery’s portfolio of premium brands includes Discovery Channel, HGTV, Food Network, TLC, Investigation Discovery, Travel Channel, MotorTrend, Animal Planet, Science Channel, and the multi-platform JV with Chip and Joanna Gaines, Magnolia Network, as well as OWN: Oprah Winfrey Network in the U.S., Discovery Kids in Latin America, and Eurosport, the leading provider of locally relevant, premium sports and Home of the Olympic Games across Europe. For more information, please visit corporate.discovery.com and follow @DiscoveryIncTV across social platforms.

Whalerock Industries
Whalerock Industries is a West Hollywood-based production and consulting company founded by Lloyd Braun. Its Whalerock Studios produces highly acclaimed and popular unscripted series, including Hyperdrive (Netflix), Savage Builds (Discovery), and Ravi Patel’s Pursuit of Happiness (HBO Max). Whalerock’s award-winning team of producers, digital product developers and marketers has created and operated multiple #1 direct-to-consumer apps and web properties with the world’s most influential celebrities and brands. As a consulting firm, Whalerock draws on this experience to help other companies to innovate and grow their businesses by thinking like an entertainment company. Whalerock consultants create and execute transformative digital, content and marketing strategies that deliver clear and measurable business results by turning customers into fans.

What do you think? Do you enjoy the BattleBots TV series? Are you glad to hear that it’s been renewed for two more seasons?

Is there a new season of Battle Bots coming out
in September 2021?

Yes, I am a big fan of BattleBots on the Discovery channel. I Would like to know when the 2021 programing starts.