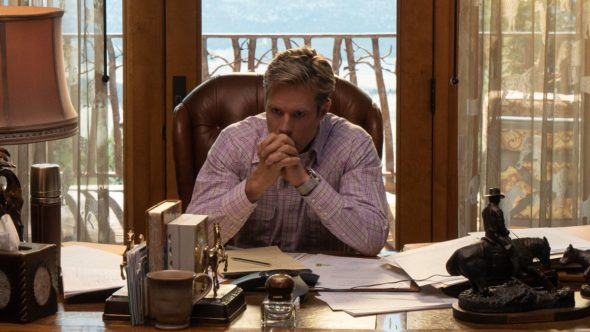 Reacher is adding a new face to its cast for season two. Shaun Sipos (Outer Range, above) is joining the action series which is based on the novels by Lee Child.

Deadline revealed the following about Sipos’ upcoming role in the Prime Video series:

In a one-year deal, Sipos will play David O’Donnell. He served with Reacher (Ritchson) in 110th, the Army’s unit of Special Investigators, and is like a brother to Reacher.

Season two of Reacher is based on book 11 titled Bad Luck and Trouble and Sipos’ character is a prominent one in the book. It is the only novel that the character appears in which explains the actor’s one-season deal.

Reacher was renewed for a second season in February, ahead of the series’ launch. A premiere date for season two of the series will be announced in the future. Production begins this fall on the new episodes.

What do you think? Did you watch the first season? Are you looking forward to watching season two of Reacher?

We loved the series and so glad it was renewed. Lee Childs books are so good! Alan Ritchson perfect for the role. Can’t wa

great show, entertaining, unlike many of other shows these days.

ALAN RITCHMAN IS JACK REACHER. He nails the character. I do not watch much television, but I have watched Season 1 twice, straight through. I can not wait for ALL the seasons. FINALLY …. a smart and classy good guy.
Right up there with Pendergast.

I really enjoyed the First Season of this show. I have been waiting patiently for the Season 2 to be announced. It seems that we won’t see it until 2023. If anyone has a premiere date please let me know.

First series was excellent, can’t wait for the next one, my only problem is, because they are skipping books 2 to 10, I will have to read faster, they have nearly caught up to where I am at! Keep ’em coming

I loved season 1 of Reacher . Once I started watching I couldn’t stop. Can’t wait for season 2.

My husband and I are both avid fans of the Lee Child book series featuring Jack Reacher. They are intelligent, compelling and simply mesmerizingly good! Alan Ritchson is so perfect in this role….he’s all the right combination of smart, determined, handsome & extremely well built and has a great combination of humor and compassion and sex appeal! Keep this series alive please!!