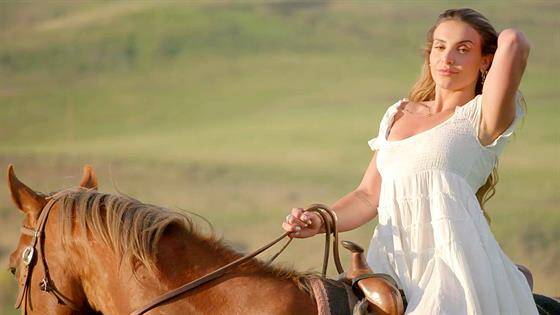 Relatively Famous: Ranch Rules is headed to the E! channel. The new reality series features eight celebrity offspring as they live and work together to reopen a Colorado Ranch.

Viewers can see a sneak peek of the new reality series later tonight. Relatively Famous returns on January 12th. E! revealed more about the upcoming series in a press release.

“From Hollywood luxury to country chic, E! rounds up eight celebrity offspring for the ride of their lives on a working ranch in Steamboat Springs, Colorado. Throughout the season, the cast finds themselves in fish-out-of-water situations and hilarious misadventures as they work to restore and reopen Saddleback Ranch to the public after a year of shutdown and loss due to the pandemic. Relatively Famous: Ranch Rules premieres Wednesday, January 12 from 9:00-11:00pm ET/PT with two back-to-back episodes. A special sneak peek of the premiere episode will air on Tuesday, December 7 at 11:00pm ET/PT immediately following the “People’s Choice Awards” on E!.

Known for their celebrity parents, the cast is trading in designer labels for chaps and cowboy boots as they set out to prove that they are more than just their famous last names. Throughout their 30-day stay, the ranch owners task them with all the outrageous, messy, and challenging jobs that come with working on a ranch. As they navigate their unfamiliar, and often uncomfortable, living situation, the group connects over their shared, unique experiences growing up with famous parents. As some bond and others butt heads, it doesn’t take long for drama and hookups to heat up the bunkhouse. Throughout long, exhausting days of hard labor, the crew wonders who will sink or swim as they race to reach the enormous goal of reopening beautiful Saddleback Ranch to the public.

Daughter of rock icons Pat Benatar and Neil Giraldo, Hana Giraldo, is also a musician and entertainer. Hana makes it known that her thick skin is tough to scratch. She will always stick up for herself, no matter the cost. On the heels of a recent breakup, Hana is single and ready to mingle on the ranch.

As a second-generation professional wrestler, Austin Gunn must work twice as hard to impress his dad, Wrestling Hall of Famer Billy Gunn. Austin loves to be at the center of the action on the ranch and doesn’t mind calling out those who aren’t pulling their weight. Open to love, Austin finds himself in the middle of a new romance with a fellow ranch hand.

Taylor “Tay” Hasselhoff, daughter of Hollywood beach hunk David Hasselhoff, is a self-proclaimed “daddy’s girl.” Tay, a luxury real estate agent, is impossibly down to earth and has a hard time tolerating any pettiness in the group. As an optimist and huge animal lover, Tay is ready to try her best at whatever is required on the ranch.

Jasmin Lawrence is the daughter of famous actor and comedian Martin Lawrence and stepdaughter of three-time Super Bowl Champion and NFL Hall of Famer Emmitt Smith. As the oldest of seven kids, Jasmin usually falls into a motherly role with friends. Though she’s the first to admit she’s had a charmed life, she’s ready to roll up her sleeves and face new challenges.

Model and DJ Myles O’Neal is the son of NBA legend Shaquille O’Neal and reality matriarch Shaunie O’Neal. With a big personality like his dad, Myles and his infectious smile stand out in the group. He is excited to see who will be living on the ranch with him. Though he’s not used to sharing such close quarters with other people, he’s looking forward to moving outside his comfort zone.

Son of Grammy-Award-winning musician and actor Ray Parker Jr., Redmond Parker is ready to saddle up and take on the ranch. As a serial entrepreneur, Redmond is no stranger to hard work and determination, but the rigid schedule of ranch life may prove more challenging.

Harry James Thornton, son of Academy Award winning actor Billy Bob Thornton, is a prop master in LA. Harry admits that he’s had trouble connecting with people in the past, so he’s hopeful that this experience will lead to some lasting friendships.

As the daughter of hip-hop legend and pioneer rapper Eazy-E, Ebie is now carving her own path as a rising musician and performer in LA. She has a rocky start on the ranch and tends to be squeamish around some of the messier tasks, but she’s hopeful that the life-changing challenges along the way will make her stronger than ever.

Check out a preview for this new reality series below.

What do you think? Do you plan to check out Relatively Famous: Ranch Rules on the E!?

WTAF – who is watching this rubbish? I vote they remain unvaccinated and have to work as a volunteer on the covid ward, without PPE of course. More rubbish television invading the already questionable intelligence of humanity – at this point we kinda deserve to burn to death in our own greenhouse planet – starting with the makers of anything on E or Vibe or MTV or any of these other ‘reality’ shows. Arggggh

‍ Another pointless show no one asked for.

I can feel my IQ lowering just thinking about watching this.