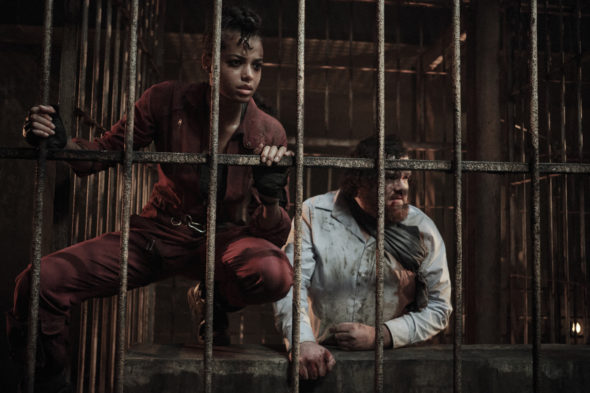 It’s a bad day for both the survivors and the Zeroes. The Resident Evil TV series has been cancelled, so Netflix subscribers won’t be seeing a second season, reports Deadline.

An action horror series, the Resident Evil TV show is based on the video game by Capcom. The series stars Lance Reddick, Paola Núñez, Turlough Convery, Tamara Smart, Siena Agudong, Adeline Rudolph, Ella Balinska, Connor Gossati, Ahad Raza Mir, and Pedro de Tavira Egurrola. In 2022, the action follows 14-year-old half-twins named Billie (Agudong) and Jade (Smart). They’re the offspring of Doctor Albert Wesker (Reddick) and were conceived via suspicious circumstances. The girls’ lives change dramatically when their father is given an executive position at the Umbrella Corporation, a struggling company that once employed him. They move to New Raccoon City, a planned community run by Albert’s employer. While there, the girls stumble onto the dark secrets behind their origins and Umbrella’s dark past. Meanwhile, Albert coordinates a response to the outbreak of a retroviral bio-weapon called T-virus. In the year 2036, the T-virus has reduced civilization to 300 million. They live in walled-in communities, surrounded by billions of “Zeroes”, the blood-thirsty infected and mind-shattering creatures. Jade (Balinska) fights for survival and is haunted by her past in New Raccoon City, by her father’s chilling connections to the sinister Umbrella Corporation but mostly by what happened to her sister, Billie (Rudolph).

The first season of eight episodes was released on July 14th. It initially landed at number two on Netflix’s Top 10 list with 72.7 million hours of viewing. In week two, Resident Evil had another 73.3 million hours, an indication that the show wasn’t getting much word-of-mouth promotion. Viewership dropped in week three, and that was the drama’s last week on the streamer’s Top 10 list. Reviews from critics and viewers have generally been mediocre at best.

Netflix often makes renewal/cancellation decisions based on weighing viewing vs. production costs. Given the first season’s underwhelming performance, it’s not a surprise that the streamer didn’t want to take a chance on making a second round of episodes.

What do you think? Did you like the Resident Evil TV series on Netflix? Are you sad that this horror show hasn’t been renewed for a second season?

This is what happens when you focus on diversity and representation instead of entertaining your audience.
The writing and acting were atrocious. This was so CW it was cringe! Why? Why? Why?
Stop making changes to canon and lore for representations sake. Make something new and do with it as you will but stop taking things that are established and ruining them with asinine stories and leads.
Stop sexualizing teens and stop dressing girls like *****. Also, stop making them stupid.

A bit of a shame, really. I thought a second season would have been a “no-brainer” (pun intended).