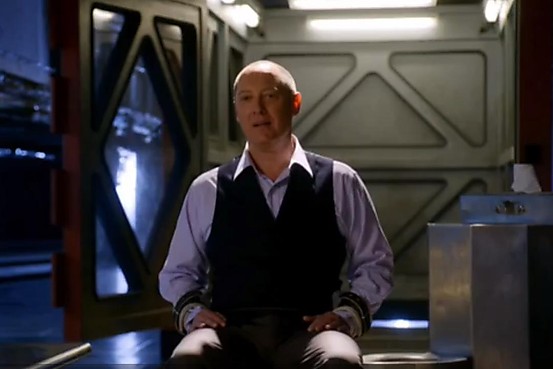 Last year, NBC found early ratings success with Revolution on Monday nights at 10pm. Will The Blacklist be a big hit, a moderate success, or quickly cancelled? Is it worth watching?

On The Blacklist, Raymond Reddington (James Spader) is a former government agent who’s been selling classified information to terrorists. A wanted man, he turns himself in one day out of the blue. He offers to make a deal.

He will help the FBI capture terrorists but only if he’s partnered with a certain newbie FBI agent named Elizabeth Keene (Megan Boone). Why her? Therein lies part of the mystery. Others in the cast include Harry Lennix, Diego Klattenhoff, Ryan Eggold, and Ilfenesh Hadera.

Does the show sound interesting? Here’s what some critics are saying?

TIME: “The Blacklist, though, seems to be setting itself up to be largely a bad-guy-of-the-week show, and the pilot’s first caper is not too promising in that respect. So the show’s success moving ahead is going to depend on how interesting Reddington and Keen’s backstories become, and how much those are overwhelmed by the self-contained ticking-time-bomb scenarios. For now, though, how much you enjoy The Blacklist depends on whether you enjoy watching Spader enough to overlook all the times you’re not.”

NY Daily News: “It’s a showcase role for Spader, whose every sentence suggests he knows way more than he’s telling and makes us want to know it, too. Boone’s character also seems destined to roll out slowly, and the rest of the cast provides solid structure around them… The Blacklist won’t be the most cerebral show on television. It’s a fast-paced mystery that’s just plain entertaining.”

Columbus Dispatch: “Nothing new here, on the surface, but creator Jon Bokencamp, who has a couple of Halle Berry thrillers under his belt, knows how to breathe new life into familiar setups. A show like The Blacklist reminds us that ‘imagination’ doesn’t always mean coming up with a unique story idea for a new show: Sometimes, it can mean reviving a familiar, even shopworn, concept like the bad guy helping the good guys solve crimes.”

Boston Globe: “There is absolutely nothing in the pilot that makes me eager to return, not Spader’s theatrical performance, which seems destined to become monotonous, or Boone, who is fine as Keen, but only that. The plot twists come too fast and they are too flagrantly preposterous, particularly as Red and the FBI track down the mega-baddie of the week.”

Salt Lake Tribune: “Spader is delicious to watch as he manipulates everyone around him. And there’s genuine suspense in the pilot episode, offering up hope that this could indeed be a good series.”

Boston Herald: “Somebody really loved Silence of the Lambs. NBC’s thoroughly unofficial homage is not without its treats. James Spader stars as Raymond ‘Red’ Reddington, an ex-government agent turned mercenary, a classified documents leaker who makes Edward Snowden look as if he’s been dropping Post-it notes.”

Newsday: “Spader seems to be the only one who actually gets the gameplay here. The blacklist is what our mad genius calls his criminal inventory, because ‘it sounds exciting,’ lip smack, grin. The actor’s strut recalls brain-candy romps like The Man From U.N.C.L.E. elegantly preposterous tongue-in-cheek adventures. And the script seems to incite his appetite. But everyone else acts 21st century serious, which, after a zillion CSI-style bleakfests, is really, like, so over.”

THR: “It’s certainly an intriguing pilot – you can’t take your eyes off of Spader, and the writers have thrown in a couple of other interesting twists. It’s likely that The Blacklist will at least approach the bad-guy-a-week format of a closed-ended procedural that doesn’t tax viewers’ brains too much. But in the process, the pilot suggests there are other things to keep you interested along the way. That is, beyond just sitting there eating popcorn and basking in the delicious way that Spader takes on this role. He’s enough to warrant a real long look at The Blacklist, but there seems to be more depth there for the long haul as well.”

What do you think? Do you agree with any of the critics? Is The Blacklist worth watching? If you’ve seen it, will you watch again?

I LOVE this show and not just because James Spader is Brilliant! But, I’m so annoyed that it keeps getting pre-empted! Didn’t they make enough episodes to fill a whole season?

I absolutely love this show. Best show I’ve seen in years. I really hope they don’t cancel it. James Spader is amazing. Completely mesmerizing. Can’s take my eyes off him. Love it! Love it!

You bet we’ll watch it. The Blacklist is, by far, one of the best new shows of the season. I like smart scripts and talented casts and good directors, and it seems all that came together in this show. As for the newspapers and their incredible hubris aside, The Blacklist is very good. And funny! I never saw that coming! Having James Spacer play Red Reddington was a stroke of genius. And if it’s one thing I know about the world inside the walls of a studio, there is much heavy competition and those that lose generally don’t lose well.… Read more »