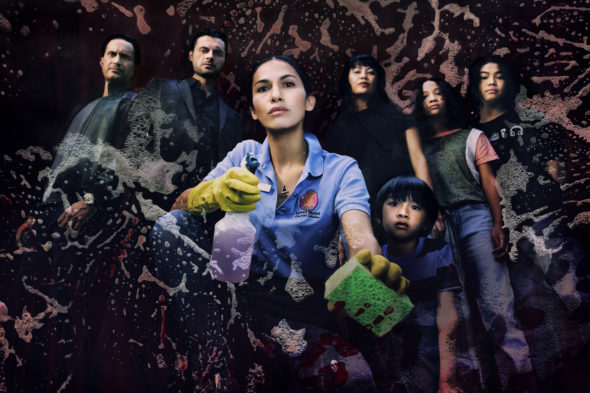 TV show description:
A crime drama series, The Cleaning Lady TV show was created by Miranda Kwok and is based on an Argentinian television series, La Chica Que Limpia, by Lucas Combina.

Thony De La Rosa (Yung) is a whip-smart Cambodian doctor who comes to the U.S. for medical treatment to save her ailing son, Luca (LaSalle). With her son diagnosed with a life-threatening immunodeficiency disorder and her husband, Marco (Ivan Shaw), struggling with a gambling addiction and unable to get a visa, Thony is left to save the boy on her own.

Where she once had it all — a successful career as a doctor, loving husband, and family — Thony is now living in Las Vegas with her sister-in-law, Fiona (Millan). She’s waiting for a matching bone marrow donor for Luca while struggling to make ends meet as an undocumented worker.

When the system pushes her into hiding, Thony refuses to give up. Through an unexpected run-in with a lieutenant of a powerful crime syndicate, Arman Morales (Canto), she becomes a cleaning lady for their operation.

Crossing into a world of moral greys, Thony begins to live a double life, keeping secrets from her family, while cleaning crime scenes for Arman and dodging the law, including the smooth-talking FBI Agent Garrett Miller (Hudson) who is in pursuit.

Using her cunning and intelligence to forge her own path in the criminal underworld, Thony does what is necessary to save her son Luca — even if it means sacrificing her own soul in the process.

What do you think? Do you like The Cleaning Lady TV show? Do you think it should be cancelled or renewed for another season?