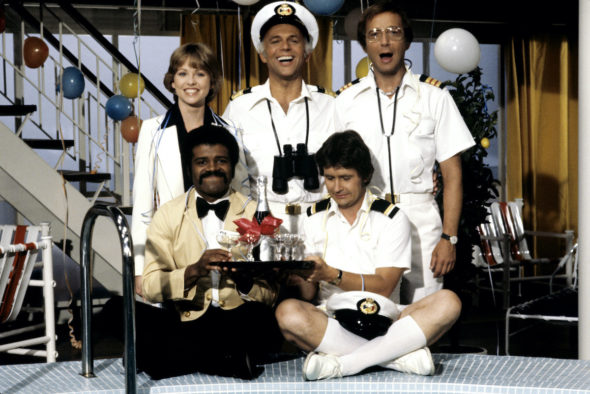 “Come aboard, we’re expecting you!” For nine seasons, ABC encouraged viewers to board The Love Boat on Saturday nights. The series ran from 1977 until 1986 and was the fifth-most-watched network series for the 1980-81 season.

Hosted by SiriusXM host Seth Rudetsky and his husband, producer James Wesley, Stars In the House has been airing nightly since the coronavirus pandemic shut Broadway theatres nearly a year ago.

Viewers are encouraged to donate whatever they can to The Actors Fund, a non-profit that helps everyone (not just actors) in film, theater, television, music, opera, radio, and dance with programs including social services and emergency financial assistance, health care and insurance counseling, housing, and secondary employment and training services. Contributors can then submit their receipt to the hosts and the guests often read the names during the show. Stars In the House has helped to raise $689k to date.

Episodes are available for streaming on YouTube after they’ve aired.

What do you think? Did you watch The Love Boat when it first aired? Would you like to see a new version someday?

I think they should do a remake with the original cast! But if it were possible to do a remake with new cast, yet maintain the lighthearted charm of the original days (instead of the drama-filled junk of today), I’d watch it in a heartbeat. Unfortunately, probably those of us 50 and older would be the only ones who would appreciate it! I really enjoyed the talents of all the actors on the original show, and I especially admire Lauren Tewes for her courage and strength throughout her life. I always secretly wish I’d run into her when I take… Read more »

It’s been said that timing is everything, so why do you send us this notice today when the show took place three days ago? Now I’ll have to find it on YouTube.

It was posted on Thursday (are you signed up for weekly alerts, not daily?) and the video is posted in the article.

I loved the show! Never missed an episode.

No on a new version. Just wouldn’t be the same. Original characters can’t be substituted. Would not last on tv

I loved that show as a kid. I wish it were available to stream somewhere. I have looked but not found it ever. Anyone know if it’s available online?

Pluto has a Love Boat channel that plays the episodes 24/7!

I did watch the love boat as a kid. Loved it! . Would love to see a reunion. Maybe they could have reunions of other TV shows on the love boat, like for Friends or Seinfeld.

Glad to see that they’re all still alive.

Would love a renewal but be careful whom u hire! They won’t be easy to replace! We don’t miss the reruns!! Really takes us back!!