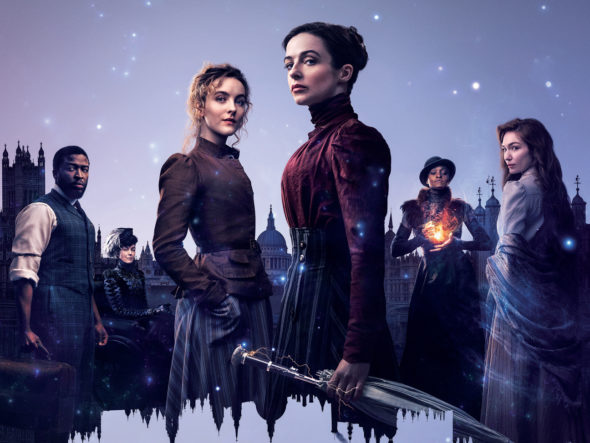 Set in 1896, Victorian London is rocked to its foundations by a supernatural event that gives certain people — mostly women — abnormal abilities, from the wondrous to the disturbing. But, no matter their particular “turns,” all who belong to this new underclass are in grave danger.

It falls to mysterious, quick-fisted widow Amalia True (Donnelly) and brilliant young inventor Penance Adair (Skelly) to protect and shelter these gifted “orphans.” To do so, they have to face the brutal forces determined to annihilate their kind.

Lavinia Bidlow (Williams) is the wealthy benefactress funding the orphanage for Amalia’s outcasts, who are also known as the Touched. Augustus “Augie” Bidlow (Riley) is Lavinia’s sweet, awkward, younger brother with a secret of his own. Orphanage doctor Horatio Cousens (Momoh) has gained healing powers.

Mary Brighton (Tomlinson) is a broken and resilient performer pursuing her dream of singing on stage. Adaptive and streetwise, Lucy Best (Berrington) has quick-wit and high spirits that mask the pain of a tragic past.

Primrose Chattoway (Devlin) who, at ten feet tall and with a dreamy demeanor, wishes to be an ordinary girl not taking up too much space. A young Scottish Sikh and aspiring lawyer, Harriet Kaur (Sawar) is determined to live her life as she’d planned.

Myrtle Haplisch (Prettejohn) is a middle-class girl rescued from a family who cannot understand her – literally, as she can no longer speak any form of language they understand.

Désireé Blodgett (Smith) is a prostitute with a power that gets her in trouble and a six-year-old son who never speaks. A rakish and charming young thief, Nimble Jack (Heaven) is an expert at breaking and entering.

Hugo Swann (Norton) is the rich and irreverent proprietor of a den of iniquity. Deranged doctor Edmund Hague (O’Hare) is searching for the source of the Touched’s powers. Criminal overlord Declan “Beggar King” Orrun (Frost) is charismatic and brutal.

What do you think? Do you like The Nevers TV show? Do you think it should be cancelled or renewed for another season?

Wonderful show. Complex and challenging. Eagerly anticipating the second half of season one.