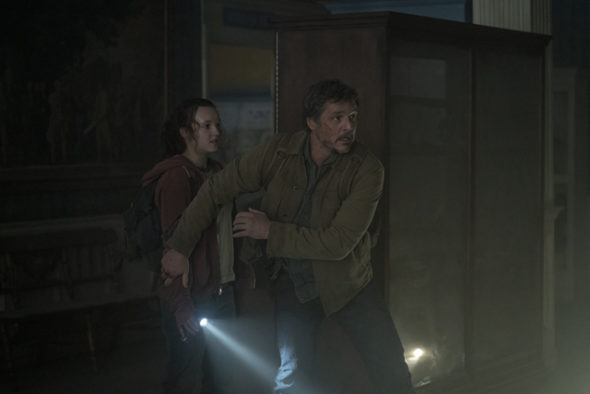 Joel and Ellie have a brutal journey ahead of them in The Last of Us TV show on HBO. As we all know, Nielsen ratings typically play a big role in determining whether a TV show like The Last of Us is cancelled or renewed for season two. Unfortunately, most of us do not live in Nielsen households. Because many viewers feel frustrated when their viewing habits and opinions aren’t considered, we invite you to rate all of the first season episodes of The Last of Us here. *Status update below.

An HBO post-apocalyptic drama series, The Last of Us TV show is based on the 2013 video game and stars Pedro Pascal and Bella Ramsey with Gabriel Luna, Anna Torv, Merle Dandridge, Jeffrey Pierce, Murray Bartlett, and Nick Offerman in recurring roles. The story takes place two decades after the destruction of modern civilization. Joel (Pascal) is a hardened middle-aged survivor who is tormented by trauma in his past. He’s tasked with smuggling a 14-year-old girl named Ellie (Ramsey) out of a quarantine zone and across the United States. What starts as a small job soon becomes a brutal, heartbreaking journey. To survive, they are forced to depend on one another and endure both brutal circumstances and ruthless killers on a trek across a post-pandemic America.

What do you think? Which season one episodes of The Last of Us TV series do you rate as wonderful, terrible, or somewhere between? Do you think The Last of Us should be cancelled or renewed for a second season on HBO?

*1/27/23 status update: HBO has renewed The Last of Us TV series for a second season.

Great show I hope you bring it back, please Haven’t been anything good on tv for a while that’s why I stop watching tv

rip off of pther shows/movies

It’s actually based on a video game so really not a rip off of other shows or movies.