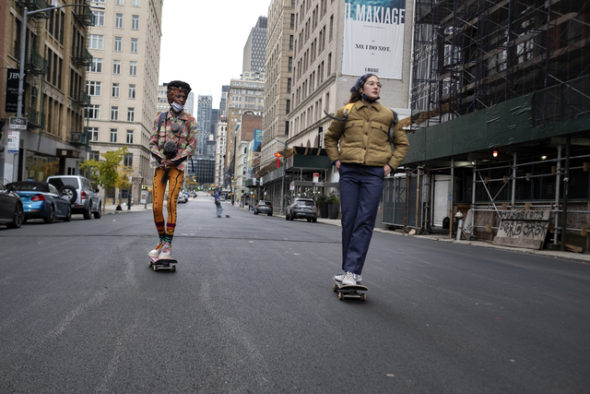 Are these ladies up for the challenges in the second season of the Betty TV show on HBO? As we all know, the Nielsen ratings typically play a big role in determining whether a TV show like Betty is cancelled or renewed for season three. Unfortunately, most of us do not live in Nielsen households. Because many viewers feel frustrated when their viewing habits and opinions aren’t considered, we invite you to rate all of the second season episodes of Betty here.  *Status Update Below.

An HBO teen comedy, the Betty TV show stars Nina Moran, Dede Lovelace, Moonbear, Rachelle Vinberg, and Ajani Russell, with Katerina Tannenbaum, Andrew Darnell, Lil’ Dre, Chef Roblé Ali, Rad Pereira, Isabel Palma, Eisa Davis, Danielle Melendez, Aya Aldamin, Florence Pedrosa Blake Mourad, Alexander Cooper, Raekwon Haynes, Moisés Acevedo, Judah Lang, Joe Apollonio, and Sage Ceasar. Set against the backdrop of New York City, the series follows a diverse group of young women as they navigate their lives through the predominantly male-oriented world of skateboarding. In season two, the five protagonists step firmly into womanhood and tackle all the challenges it brings. As they navigate the pressures of adulthood, their male counterparts start to step up, step in, and become true allies, forming a united front for the greater good. Set in the last chapter of 2020, the season captures the pandemic in the Big Apple, where masks and outside activities are the norm.

What do you think? Which season two episodes of the Betty TV series do you rate as wonderful, terrible, or somewhere between? Do you think that Betty should be cancelled or renewed for a third season on HBO? Don’t forget to vote, and share your thoughts, below.