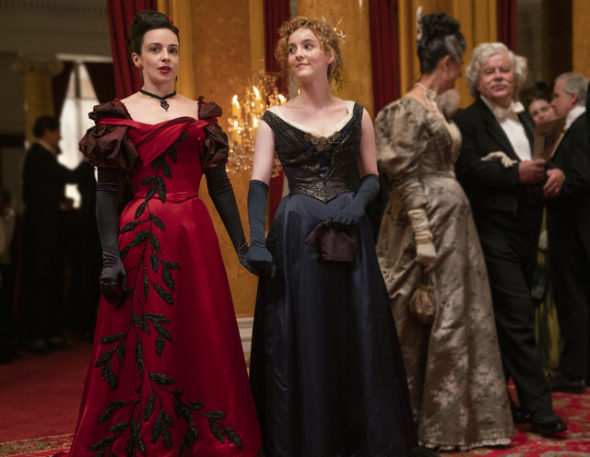 Are powers a blessing or a curse? Has The Nevers TV show been cancelled or renewed for a second season on HBO? The television vulture is watching all the latest cancellation and renewal news, so this page is the place to track the status of The Nevers, season two. Bookmark it, or subscribe for the latest updates. Remember, the television vulture is watching your shows. Are you?

The first season of The Nevers averages a 0.09 rating in the 18-49 demographic and 532,000 viewers. Find out how The Nevers stacks up against other HBO TV shows.

Will HBO cancel or renew The Nevers for season two? The series was created by Joss Whedon which, ordinarily, would be a big plus for a supernatural series about empowered women. After all of the recent allegations about how Whedon has treated some of his actors and writers, it’s hard to tell if his name will ultimately help or hinder the show’s chances of survival. The traditional ratings are okay but the series does well in streaming and delayed viewing so, I think The Nevers will be renewed. I’ll update this page with breaking developments. Subscribe for free alerts on The Nevers cancellation or renewal news.

What do you think? Do you hope that The Nevers TV show will be renewed for a second season? How would you feel if HBO cancelled this TV series, instead?

Just got HBO and we are enamored of “the Nevers” ~ hope it NEVER ENDS!!!

Streamed this show. Would have watched it when running but just signed up for HBO. Please keep – Excellent shows. Love the characters!

Love the show hope it is renewed

HBO’s The Nevers could be as big as the Walking Dead (early years). If Ms. Amy Manson doesn’t win an acting award— then, the awards are fixed. Her portrayal of the characters, especially Maladie, is the best I’ve seen on ANY program in years on ANY viewing format or show available on ATTtv, HBOgo or HBOmax, Netflix, AppleTV, Youtube, etc.

Please renew the nevers for a second season love this show