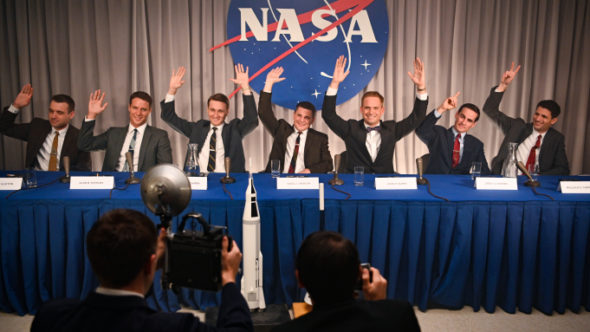 “The eagle has…” been grounded, at least for now. Disney+ has cancelled The Right Stuff TV series. It’s the first cancellation by the streaming service but season two is being shopped elsewhere.

Warner Bros. Television, the studio behind the series, is shopping a potential second season to other outlets. Deadline reports that the cast options expire today and the studio has asked for a two-week extension. Talks had reportedly been underway with Disney about what a second season could look like and one idea would focus on a new mission from the 1980s which would have likely have meant a new cast.

There’s apparently a big financial reason for the studio to want to keep making The Right Stuff.  In November, the series was given a $13.7 million incentive to move production from Florida to California for a second season. It’s the fourth-highest relocation incentive ever awarded under the California Film Commission program.

What do you think? Have you watched The Right Stuff TV series on the Disney+ service? Would you like to see a second season, potentially with a new cast and mission?

Really?
There was so much more to tell about the whole Gemini/Apollo project!
Loved the actors, very well cast.

I would have watched it but wasn’t interested in subscribing to yet another streaming service.

Copy it was from a movie with Ed Harris is star 1979 came out in theaters. This show more documentary series.

They should move it back to NatGeo where it was supposed to air in the first place. I was looking forward to it but couldn’t watch once it was moved to Disney+.

The 4th highest relocation incentive, and they still cancel?