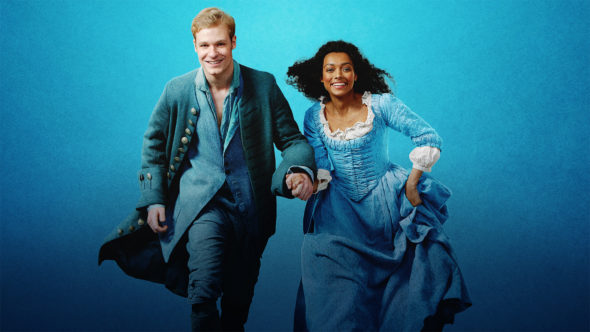 Tom Jones finally has its premiere date. The romantic comedy will air in four parts on PBS’ Masterpiece series this spring. Based on the novel by Henry Fielding, the series follows Tom (Solly McLeod) as he tries to win the affection of the love of his life (Sophie Wilde). James Fleet, Alun Armstrong, Squire Western, and Felicity Montagu also star in the series.

PBS revealed more about the series in a press release.

A timeless romantic comedy gets an exciting new adaptation in MASTERPIECE’s retelling of Henry Fielding’s novel Tom Jones, written by BAFTA-nominated Gwyneth Hughes (Vanity Fair) and airing in four parts, Sundays, April 30 – May 21, 2023 at 9pm ET on PBS. The coproducer of the series is Mammoth Screen. The program will also be available to stream on PBS.org, PBS Passport, and the PBS MASTERPIECE Prime Video Channel.

Solly McLeod (House of the Dragon) stars as the handsome, resourceful title character, with Sophie Wilde (You Don’t Know Me) as the beautiful and bright, seemingly unattainable love of his life, Sophia Western. He is a foundling of uncertain parentage, while she is an heiress. In 18th-century England, their class differences make their journey to find each other complicated and treacherous. Emmy®-winning actress Hannah Waddingham (Ted Lasso) plays the seductive and vengeful Lady Bellaston, who comes between Tom and Sophia.

Says Gwyneth Hughes: “It’s been the most joyful experience to bring this sparkling romance to the screen. It’s a story in which the sun never stops shining, and in which Love Conquers All, and that just makes such a refreshing change after the last couple of years! Henry Fielding created brilliant characters, fully of their time, but still speaking directly to us in the modern world, as we strive towards our own versions of love and happiness. I’ve loved writing alongside him.”

Says Executive Producer Susanne Simpson, “This new adaptation of Tom Jones is a big-hearted rom-com that will absolutely delight our viewers. It’s fun–full of laughter and romance. I’m extremely proud to partner with producers Mammoth Screen, writer Gwyneth Hughes, and an outstanding cast on this joyful show.”

Felicity Montagu (The Durrells in Corfu) plays Allworthy’s reserved sister, Bridget, with James Wilbraham (In My Skin) as her odious son, William Blifil—an unrelenting antagonist to Tom. He and Tom eventually battle for Sophia’s hand, a contest that Blifil seems destined to win.

Sophia has a trio of watchful aunts, played by Shirley Henderson (See How They Run) as the headstrong Aunt Western, Tamzin Merchant (Carnival Row) as the diffident Aunt Harriet, and Waddingham as Lady Bellaston, who is attentive in her own way. Sophia also has a worldly- wise servant Honour, played by Pearl Mackie (Doctor Who).

When banished in disgrace by his adoptive father, Tom leaves for London. Not far behind him, Sophia heads there to escape a forced marriage to Blifil and seek the protection of her aunts. Along the way, Tom meets disgraced schoolmaster Partridge (BAFTA winner Daniel Rigby, The Witchfinder), Mrs. Waters (Susannah Fielding, Wallander), and the irascible soldier-of-fortune Fitzpatrick (Julian Rhind-Tutt, Oliver Twist).

Humor is a hallmark of Fielding’s novel, which has been a bestseller for nearly three centuries and was famously depicted in the exuberant Academy Award®-winning 1963 movie adaptation starring Albert Finney as Tom and Susannah York as Sophia.

The trailer for Tom Jones is below.

What do you think? Are you planning to check out this new PBS series? Are you familiar with the Tom Jones novel?