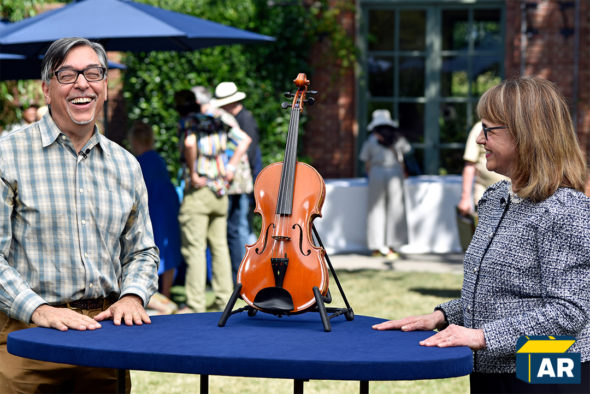 Antiques Roadshow is back on the road, and the 27th season will launch in January on PBS. The upcoming 25-episode season will include big-ticket items, including a musical instrument worth more than $200,000 dollars.

PBS revealed more about the series’ return in a press release.

ANTIQUES ROADSHOW returns with an all-new season showcasing bustling appraisal events from across the country that capture the serendipitous and jaw-dropping ROADSHOW moments fans crave! Season 27 of the PBS pop-culture phenomenon premieres Monday, January 2, 2023, hitting a high note with a $200,000-$330,000 musical instrument appraisal.

“After two years of pandemic filming, being back on location with our full ROADSHOW appraisal events was a dream come true,” said executive producer Marsha Bemko. “The energy and excitement on set was palpable, and the stories and treasures captured for this new season wowed us all. When the episodes premiere, I know our fans will be wowed, too!”

The season kicks off with “Filoli, Hour 1,” featuring a season-topping viola, purchased by the guest’s grandfather directly from renowned maker Ansaldo Poggi during a moment of happenstance in the 1960s. The story is “almost unheard of” according to the appraiser, who values the beautiful instrument at a whopping $200,000-$330,000!

A preview of surprises to come this season include:

-A piece of modern computer history was discovered in Silicon Valley when a guest brought in a 1976 Apple-I operation manual mock-up for the Apple-II computer that was rescued from the trash and that inspired the appraiser to ponder which illustrious technology founder may have actually touched the object!

-In Santa Fe, NM, a guest who has been thrifting since the age of 15 happened upon a $1 etching of snow that “called out to her” only to discover that it was a stunning image by renowned artist Gene Kloss and is valued at $9,999 more than she paid.

-A piece of NASA history, from the era of the space-race with the then Soviet Union and autographed by astronaut Alan Shepherd, was brought to Nashville, TN, by the daughter of a technical writer who worked on the Mercury program!

-Italian haute couture traveled to Boise, ID, with a silk-velvet Fortuny jacket, passed down through the women in the guest’s family by her great-grandmother and features the famous fashion house’s proprietary techniques that are still a secret to this day!

-Presidential memorabilia can be hot collectibles and maybe none more than a sizzling briefcase owned and used by John F. Kennedy in the 1950s and brought to ROADSHOW in Shelburne, VT! The briefcase was gifted to the guest’s cobbler uncle by JFK who after leaving it in the shop following a shoeshine said, “Charlie, you keep it” on his next visit.

What do you think? Are you excited about seeing new episodes of Antiques Roadshow in 2023?

Cancelled it old time to end it done course airing but some different new antiques show fresh hip to century.