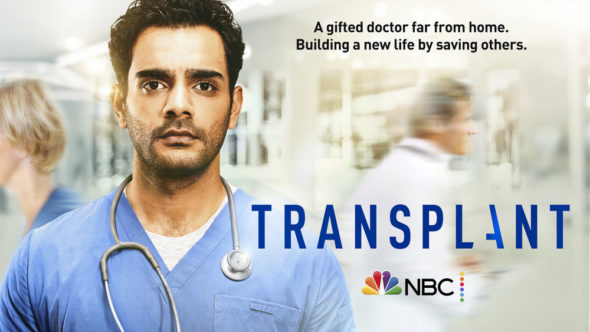 NBC has announced that medical drama Transplant will debut on Tuesday, September 1st, at 10:00 PM. The drama will follow summer series America’s Got Talent for its initial four episodes. It’s unclear what will serve as a lead-in after AGT has aired its season finale on September 22nd. Due to the ongoing pandemic, production on season three of regular Tuesday occupant New Amsterdam won’t begin until September.

Transplant originates in Canada and the first season has 13 episodes. The series has been renewed for a second season in Canada but it’s not known if NBC will be airing the sophomore season yet.

Here’s NBC’s announcement about Transplant’s debut as well as a trailer:

The 13-episode series centers on Dr. Bashir “Bash” Hamed, a Syrian doctor with battle-tested skills in emergency medicine who fled his country with his younger sister, Amira. Together they struggle to build a new life in Canada as Bash strives to rebuild his career in medicine.

NBC has a long and storied history with successful medical series, including, of course, “ER” and its current hits “New Amsterdam” and “Chicago Med.”

ABOUT SPHERE MEDIA
Sphere Media produces television and media-based content for Canadian and international markets. Based in Montreal and Toronto and with over 30 comedy and drama series in English and French, Sphere Media is known for its remarkable productions with timely and original content. In scripted television, Sphere Media achieved accolades for the groundbreaking police drama 19-2 (Bravo/CTV), winning Best Dramatic Series at the Canadian Screen Awards, and an International Emmy nomination for Best Drama. Cutthroat crime drama Bad Blood (CityTV/Netflix) and heartbreaking family drama This Life (CBC) were also multiple Canadian Screen Award nominees. Most recently, Sphere Media’s bold new medical drama Transplant, (CTV/NBCU) about a Syrian refugee doctor, aired to critical acclaim and ratings success and has been ordered for a second season. Together with its subsidiaries, Sphere Media generates high-quality productions in all genres, ranging from documentaries to feature films, including television series, game shows, magazine programs, variety shows, 2D animation, and digital projects.

What do you think? Do you like the sound of the Transplant TV series? Will you be tuning in to watch this medical drama on NBC?

Yes, I like this new TV Series, I have been trying to find it in the guide for A couple weeks now, but I have been unable to find it, I think I read that it will be back, but I am unable to figure out when it is supposed to be back.

I enjoy Transplant and am glad to see it has been renewed.

With the end of Grey’s Anatomy, I was hoping a new medical series would premiere. Transplant did not disappoint. It was exciting from the beginning and I appreciate the perspective of a character doctor who did not receive medical schooling in the U.S.

Hamza Haq is amazing, soulful, strong and vulnerable in this wonderful drama! And with a great supportive cast behind him brings to the screen painful humanity and creative kindness fully to the screen… I love all of them!! The eloquent portrayal of his relationship with little sister Amira!! Oh brings tears she is tenderly fragile yet brave..
Please more! More of this heartfelt drama!!

Once I started watching the episodes, I was hooked. Intense drama with lots of character plots and lives with very different paths crossing in daily life.

Excellent film. I love it!!

I think it’s a amazing show, with deep emotions and gives you much to think about. Excellent choice of actors – highly skilled. I hope it continue here, as I think it can be a big hit in the states.

I like the new series Transplant. Please let it come back for second season. It is different from other medical shows. It brings awareness to what is going on in the world.

Seems like a good show. I saw the pilot and 1st episode. Looks good.

I sincerely hope Transplant receives a renewal for a second season in the US. It is a thoughtful, insightful and complex drama. We need a show that makes us feel something. That makes us think a bit. This hits the spot. Thoroughly enjoying it.