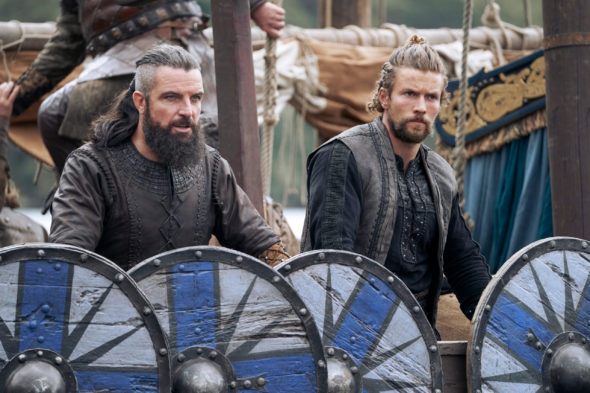 Vikings: Valhalla is returning to Netflix in 2023 with its second season, and viewers have been given their first glimpse at the series’ return.

The historical drama has already been renewed through season three by the streaming service. Each season will have eight episodes. Filming on the second season was completed in November 2021. Filming on the third season is expected to be completed next month.

The series is set over 100 years after the events seen in the Vikings series. In Vikings: Valhalla, legendary warriors Leif Erikson (Sam Corlett), Freydís Eiríksdóttir (Frida Gustavsson), and Harald Hardrada (Leo Suter) undertake an epic journey as they fight for survival and glory.

Netflix teased the following about the series in a press release.

Season One of VIKINGS: VALHALLA – now streaming – chronicles the heroic adventures of some of the most famous Vikings who ever lived – the legendary explorer Leif Eriksson (Sam Corlett), his fiery and headstrong sister Freydis Eriksdotter (Frida Gustavsson), and the ambitious Nordic prince Harald Sigurdsson (Leo Suter). As tensions between the Vikings and the English royals reach a bloody breaking point and as the Vikings themselves clash over their conflicting Christian and pagan beliefs, these three Vikings begin an epic journey that will take them across oceans and through battlefields, from Kattegat to England and beyond, as they fight for survival and glory.

Check out the first footage of Vikings: Valhalla season two below.

What do you think? Are you excited to see more of Vikings: Valhalla on Netflix next year?

Please don’t try learning any history from this nonsense show. The original even in episode one, St. Brice’s Day Massacre, occurred in 1003, when many or most of the main characters weren’t even born yet. The naughty king responsible for the deed (Aethelred the Unready) did not die immediately, but rather 13 years later, in 1016. One of the main heroes of the show, Harald Hardrada, was actually a jerk who lost much of his army to desertion, and was killed in 1066 at the Battle of Stamford Bridge along with almost his entire army. I could go on for… Read more »

Definitely looking forward to seeing this series. Love those Vikings!