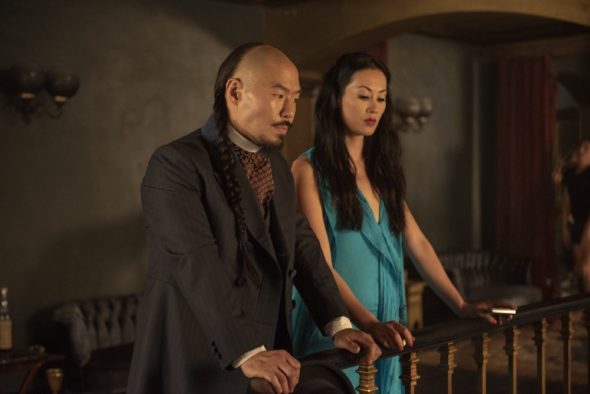 “Someone has to start fighting back.” Cinemax has just released a new trailer for their upcoming TV show, Warrior.

Based on the writings of Bruce Lee, the martial arts drama “follows Ah Sahm (Andrew Koji), a martial arts prodigy who emigrates from China to San Francisco under mysterious circumstances. After proving his worth as a fighter, Ah Sahm becomes a hatchet man for the Hope Wei, one of Chinatown’s most powerful tongs (Chinese organized crime family).” The cast also includes Hoon Lee, Jason Tobin, Perry Yung, Olivia Cheng, and Dianne Doan. 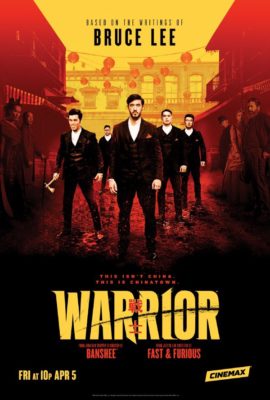 WARRIOR is a gritty, action-packed crime drama set during the brutal Tong Wars of San Francisco’s Chinatown in the second half of the 19th century. The series follows Ah Sahm (Andrew Koji), a martial arts prodigy who emigrates from China to San Francisco under mysterious circumstances. After proving his worth as a fighter, Ah Sahm becomes a hatchet man for the Hope Wei, one of Chinatown’s most powerful tongs (Chinese organized crime family).

Befriended by Wang Chao (Hoon Lee), a fixer and profiteer in Chinatown, Ah Sahm is taken under the wing of Young Jun (Jason Tobin), the hard-partying son of the Hop Wei’s leader, Father Jun (Perry Yung), who is facing an imminent opium war with a rival tong. As he is indoctrinated in the rules of Chinatown gangs, Ah Sahm wins the confidence of a canny brothel madam, Ah Toy (Olivia Cheng), revealing to her the true intentions of his journey to America.

Over the course of the season, Ah Sahm crosses boundaries inside and outside Chinatown, bringing him into contact with tong rivals Mai Ling (Dianne Doan), a beautiful and ruthless Chinese woman who has achieved a position of power in one of the tongs, and Li Yong (Joe Taslim), a tong lieutenant and Gung Fu master. As violence erupts, Sergeant “Big Bill” O’Hara (Kieran Bew) and Richard Henry Lee (Tom Weston-Jones), a transplanted southerner and rookie cop, are tasked with forming a Chinatown squad.

Meanwhile, working-class leader and tough Irishman Dylan Leary (Dean Jagger) is fighting for all Irish laborers by trying to inflict as much damage as possible on the Chinese immigrants he says are stealing their jobs. Amidst the strife, power-hungry San Francisco Mayor Samuel Blake (Christian McKay) and Deputy Mayor Walter Buckley (Langley Kirkwood), who has his own political aspirations, engage in widespread corruption, while the mayor’s young wife, Penny (Joanna Vanderham), finds herself trapped in a loveless marriage.

Episode 2: “There’s No China in the Bible”

Intercepting a shipment of opium at the docks, Young Jun (Jason Tobin), with Ah Sahm (Andrew Koji) and his Hop Wei lieutenant Bolo (Rich Ting) in tow, decides to send a message to Long Zii (Henry Yuk). Big Bill (Kieran Bew) and Lee (Tom Weston-Jones) investigate a grisly murder scene in an alley next to an Irish bar, The Banshee. Penny Blake (Joanna Vanderham), the young wife of San Francisco’s mayor (Christian McKay), finds herself in a bind while visiting the wharf with her Chinese manservant, Jacob (Kenneth Fok). Ah Sahm pays a steep price for playing the hero. The Long Zii clean up a mess, and brace for more bloodshed.

Leary (Dean Jagger) pressures gentleman industrialist Byron Mercer (Graham Hopkins), who is Penny’s father, to hire his men for a cable-car track job — despite the fact that Mayor Blake (Christian McKay) hasn’t yet awarded Mercer the contract. Accused of assault and perhaps worse, Ah Sahm (Andrew Koji) gets a cold shoulder from the Hop Wei, with his fate in the hands of an unexpected ally. Buckley (Langley Kirkwood) urges Mai Ling (Dianne Doan) to eschew restraint and start a war with the Hop Wei.

Transporting precious cargo via stagecoach through the Sierra Nevada, Ah Sahm (Andrew Koji) and Young Jun (Jason Tobin) are forced to spend the night with three strangers at a frontier saloon in the middle of nowhere. The detour turns perilous when Harlan French (Christiaan Schoombie), a notorious outlaw, shows up with his henchmen, looking for a lucrative payday.

Episode 6: “Chewed Up, Spit Out, and Stepped On”

Tensions escalate between the Hop Wei and Long Zii after an assassination attempt during a boisterous Chinatown parade. Big Bill (Kieran Bew) sets out to pay his debt to Jack Damon (Brendan Murry), leaving Lee (Tom Weston-Jones) to keep watch over Lucy (Emily Child) and the kids. Mayor Blake (Christian McKay) and Deputy Mayor Buckley (Langley Kirkwood) get a mandate from Robert Crestwood (Patrick Baladi), a senator with eyes on the White House.

Episode 7: “The Tiger and the Fox”

Ah Sahm (Andrew Koji) faces a dilemma when Father Jun (Perry Yung) sends Bolo (Rich Ting) to hunt down Long Zii (Henry Yuk) and Mai Ling (Dianne Doan). Ah Toy (Olivia Cheng) recruits a special girl from a whore monger, and takes on a business partner for a land deal. Penny (Joanna Vanderham) is faced with an unsavory choice in order to save her home. Lee’s (Tom Weston-Jones) past catches up with him.

Episode 8: “They Don’t Pay Us Enough to Think”

After a bloodbath on the streets of Chinatown, the Hop Wei and Long Zii consider a novel way to end hostilities. Ah Toy (Olivia Cheng) and her real-estate business partner, Leonard Patterson (Francois Rautenbach), hit a fork in the road in their effort to buy a valuable piece of land. After promising jobs to Leary’s Irish workers, Mercer (Graham Hopkins) toasts Crestwood (Patrick Baladi) at a fundraiser, while Penny (Joanna Vanderham) struggles to hold her tongue. Mai Ling (Dianne Doan) warns her brother against waging a battle he may not win.

Chinatown gathers to witness a “prize fight” between elite warriors from the Hop Wei and Long Zii. Buckley (Langley Kirkwood) plays a bluff in hopes of getting Mercer (Graham Hopkins) to lower his fee. Ah Sahm (Andrew Koji) remembers his roots as a fighter, as Ah Toy (Olivia Cheng) warns him of the dangers that await. Bill (Kieran Bew) and Lee (Tom Weston-Jones) question Wang Chao (Hoon Lee) about the recent series of sword killings in San Francisco.

What do you think? Are you a fan of martial arts? Will you check out Warrior?