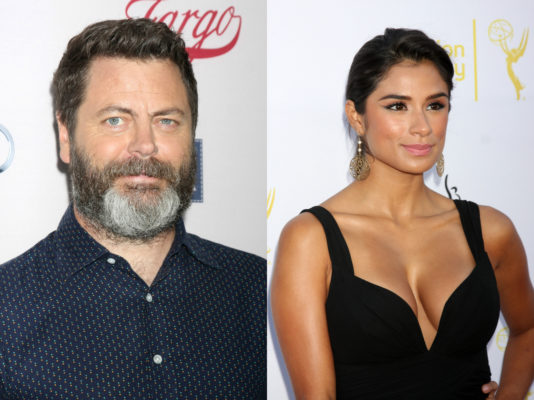 Season two of America Divided is slated to debut on EPIX later this year.

NEW YORK, N.Y – February 26, 2018 – EPIX, an MGM company, today announced that Gretchen Carlson, acclaimed journalist and empowerment advocate, Diane Guerrero (Orange is the New Black), Nick Offerman (Parks and Recreation),Jussie Smollett (Empire) and Martin Sensmeier (Westworld) have been named as the new correspondents for the second season of the critically-acclaimed documentary series America Divided. Gretchen Carlson and Jussie Smollett have also signed on as executive producers, alongside Norman Lear who is returning for his second season. The four-part series will premiere on EPIX later this year and is set to explore the most provocative news headlines and cultural topics in recent months.

Gretchen Carlson, who recently made her own personal story of harassment public, will take viewers to the halls of Congress to uncover a culture of sexual harassment, held in place for decades by a deeply flawed system.   In addition, viewers will witness the complex and often-tedious journey of her efforts to get a bipartisan bill introduced in both the House and Senate to better help harassment victims in the workplace.

Diane Guerrero, actor and activist, travels to Houston, Texas to witness the growing conflict over sanctuary cities in the aftermath of Hurricane Harvey.

Native American actor Martin Sensmeier travels to San Juan County, Utah, to investigate the controversy over the Bears Ears National Monument. While there, he  uncovers the decades of struggle for equality by the county’s Native citizens.

Nick Offerman travels to the coal country of eastern Kentucky to investigate the looming collapse of the coal industry and explores its legacy.  While there he meets the rising voices calling for a different future.

Jussie Smollett travels to Tennessee to witness the growing movement to bring down Confederate monuments and commemorate the deaths of thousands of African-Americans lynched during decades of racial terror.

What do you think? Have you seen America Divided? Will you watch season two?