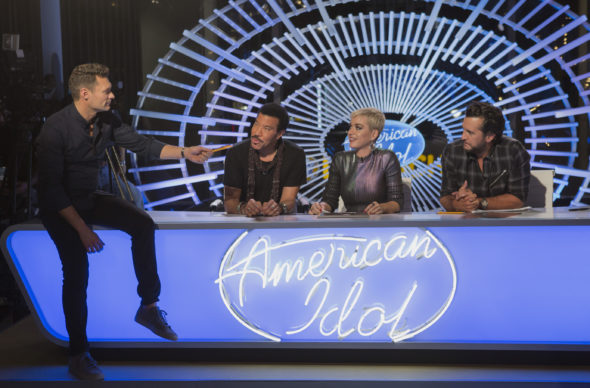 Contestants are found via nationwide open auditions. The number of contestants is narrowed down, through subsequent single and group auditions, and are judged by people like recording artists and record industry insiders.

What do you think? Do you like the American Idol TV show? Should it be cancelled or renewed for another season?

If the purpose of these singing competitions is to generate new Stars, American Idol is the ONLY competition show that has ever done that. All the rest seem to be about the judges, Idol is about the contestants. Idol screwed up when they had The Mariah/Nikki debacle, and have been trying to rebuild ever since. I may be guilty of tunnel vision here, but I’ve never heard of a single ‘winner’ of any of the other wanna-be shows having any success past the initial buzz. For those viewers who like the drama of the banter between the judges, more power… Read more »

I agree with you!!! I have loved American Idol from the onset. They are the only talent show besides Americas Got Talent that had huge winners that have made names for themselves in the music and/or entertainment industry. I do like to watch the Voice but my heart will always love AI much more. I miss AI so much!

End this forever. Should have ended years ago

kathy
Reply to  Hate this show

when does it start up again.? I WOULD LIKE TO SEE WHOS ON.

Can’t even watch 2014 AI. Please cancel after this run.

We all know that black people can sing, but once you run across a white person that has rapsiness in their voice, the world has to go crazy. Bernell should have never gone home and is shame on the judges that allowed it, this show needs to be gone because too many artists have let the talent go. I never realized the money was that important to turn your back on real talent, hope you all go away.

Do not cancel this we all love to watch people sing and get a chance to become stars look at all the singers who have become super star because of this show even ones that do not win end up making hit records or starring in movies. LOVE LOVE LOVE IT GREAT SHOW CANCEL SURVIVOR OR SPLASH OR BIGGEST LOSER OR BATCHELOR OR THAT STUPID RACE PROGRAM!!!!

Used to watch it – used to look it. I think it is time for it to go. I dislike most reality shows anyway. There are afew worth watching but not this one. It has gotten to be too much drama.

[…] of Touch, the Kiefer Sutherland drama, will debut on Friday, February 1st. The 12th season of American Idol begins on January 16th and Kevin Bacon’s new show, The Following, premieres on January […]

I
Ike the voice much better cancel

Seriously, I’m still watching it.. But it don’t make me get addicted to it. I was just looking forward on who’s winning..

Okay this show is getting old cancel it already.