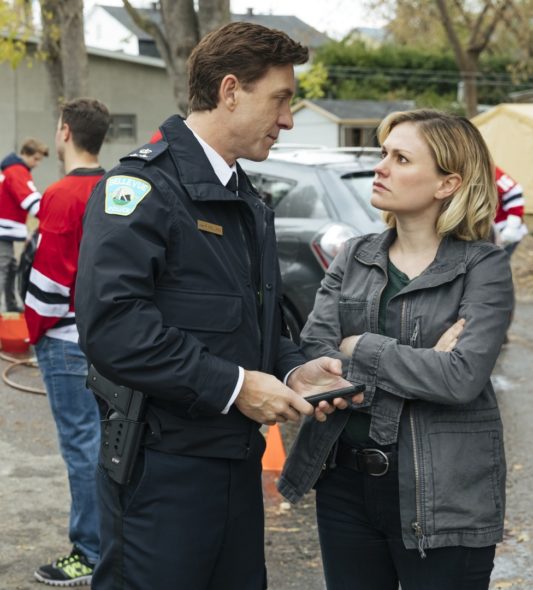 Even though it is over before it started, the already-cancelled Bellevue TV show premieres tonight, January 23, 2018 on WGN America at 10:00pm ET/PT. The Canadian TV series originally debuted on CBC in February of 2017. A second season had been in development at that network, but last May, executive producer Adrienne Mitchell announced it would not move forward.

When CBC passed on Bellevue season two. Mitchell addressed the cancellation with the website, TV, eh?:

It turns out Bellevue‘s fate is as mysterious as the show itself. After reporting last Friday that a second season was being developed for CBC came a troubling update: there is no home for the Anna Paquin-Shawn Doyle led series after all.

“To clarify, though Season 2 of Bellevue has been in development with CBC, unfortunately, production of a follow-up season is currently not moving forward,” Mitchell wrote. “We are incredibly proud of our talented cast and crew who worked so tirelessly to bring this beautiful series to life. We also feel there are more stories to tell and we’ll be looking for other opportunities to bring this to fruition. In a town like Bellevue, the future is never as it seems!”

While Mitchell first announced CBC had passed on a second season of Bellevue, back in May, there has been no news of a season two renewal by another network or streaming service.

What do you think? Do you plan to watch the Bellevue TV series premiere, or does knowing it is cancelled make you feel like it’s not worth it? Let us know, below.

I intend to continue to watch. I have to use YouTube for crime drama like this. American crime drama suck to high heaven to me.

Do people really watch shows that have been cancelled before they premiere?

Why does WGN bring on such great shows and cancel them? This happened last year with Outsiders ans Underground!

I liked it. Good dark mystery. Love the characters so far.

I love it !!! Dark mysteries and a thriller very cool

I saw this mini-series on CBC and it certainly wasn’t garbage. It is a stand-alone series and you should watch it. It is better than most US shows.

It was a cheaply produced Canadian series. With the impending Tribune Media sale to Sinclair Broadcasting they moved away from original programming like Manhattan. Salem. and Underground . To import relatively cheap garbage like this. I have major concerns about the power Sinclair will have once the deal is done.

What a bummer. And outlets wonder why they can’t hold an audience with good drama, as I hope this will be when I watch tonight. I certainly enjoyed Anna Paquin in True Blood.

I had it set to record tonight. Now that I know there will be no season two I will not be watching.

I had it set to watch tonight. Now that I know there will not be a season two, I will not be watching.

I am set to watch it, but now I’m wondering if I should invest time in a show that will not see a season 2? Was it dirt cheap for WGN, why air it?

I have to say, I am watching the pilot episode right now and already wishing for a second season. Not too many thrillers out there any more.