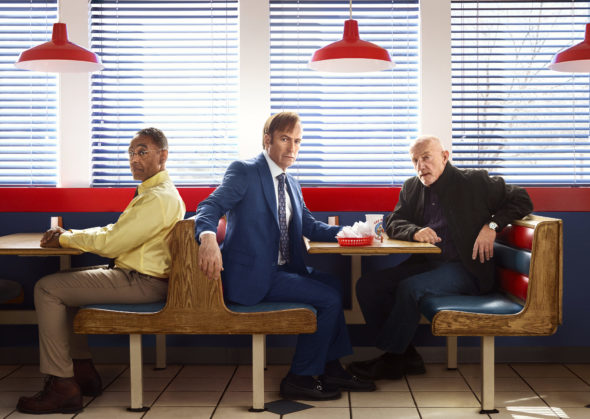 Are Jimmy McGill’s days numbered? Has the Better Call Saul TV show been cancelled or renewed for a fourth season on AMC? The television vulture is watching all the latest cancellation and renewal news, so this page is the place to track the status of Better Call Saul season four. Bookmark it, or subscribe for the latest updates. Remember, the television vulture is watching your shows. Are you?

The third season of Better Call Saul averaged a 0.59 rating in the 18-49 demographic and 1.64 million viewers. Compared to season two, that’s down by 34% and down by 24%, respectively. Learn how Better Call Saul stacks up against the other AMC TV shows.

While it has never been a huge ratings success, this critically acclaimed TV series is one of the network’s top-performing shows not involving the zombie apocalypse. Can Better Call Saul build up its audience? Will it be cancelled or renewed for a fourth season? Despite the decline in ratings, I suspect it will be renewed. This television vulture is watching, so subscribe for free updates on any Better Call Saul cancellation or renewal news.

What do you think? Are you glad that the Better Call Saul TV show has been renewed for a fourth and fifth season on AMC? How many seasons do you think this TV series will run?

Well, after watching Talking Saul on Monday night, two things seem abundantly clear. (1) is that there WILL be a Season 4 (all of the guests seemed pretty relaxed about this), and (2) is that Chuck does indeed die from the fire. I was disappointed that this was all-but revealed in advance. I thought Michael McKean stole that last episode – it was a phenomenal acting tour de force. Greetings from England.

I think networks must consider the replay value of intelligent shows such as Better Call Saul. Perhaps the ratings don’t currently prove themselves worthwhile, but I am sure that MANY people will be paying to see this show for MANY years after it premiers. I didn’t start watching Breaking Bad until 5 years after it premiered. One of the last things that persuaded me was one of my professors kept referencing the show!

We love this Better Call Saul! We look forward each week to this. Please do not cancel!!!

I really really hope there’s a fourth season of better call Saul. First season and the first half of second season was a little slow, however end of second really picked up and third season was really good. I feel the story is getting better and better with each episode. Please don’t cancel it

RENEW IT PLEASE. ONE OF THE BEST SHOWES EVER

It all started w/ brwaking bad then lead to better call saul. Please renew it!! I love the show and wait for monday nights to watch it!! Defitnitly need a season four!

OH Yes it should be renewed WE LOVE IT! Can’t really stand that the 3rd season is over and need more already and it hasn’t been 24 hours, always look forward to Monday nights to see Better Call Saul. IT’S A GREAT SHOW:)

Well, we can hope. I don’t watch “tv” but pay through Amazon to see this every week, available right after it airs. So I can’t compare it to anything else on tv, since I really don’t watch anything else. Breaking Bad was the best thing I’ve seen, although I discovered it only in retrospect, then promptly ordered all five seasons in Blu-Ray. This has become an extension of that great series. The writing, production, direction, and editing is ground breaking and fully the equal of anything in tv or film. It would be rather tragic not to see this wrap… Read more »

Why, in the name of all that is holy…is cancelling this show even under consideration? Peter Gould and Vince Gilligan are the finest talent TV has ever seen, not to mention the cast of both BB & BCS. Unbelievably gritty, high drama that sets the bar so high for other networks that I’m certain no-one will ever come close. My parents were hooked on “Dallas” & a few other shows in the 70’s; if their spirits are aware of how much TV writing & acting has evolved in this age, they’d haunt any living soul that dares to off this… Read more »

If AMC cancels this show, I will camp out in front of Netflix until they pick it up! BCS has gotten exponentially better this season! The writing, the story, the direction, the acting… All up to Breaking Bad standards. It’s a subtle masterpiece! If AMC does the unthinkable, then you know the network is truly being run by zombies.

Why is this even a debate? It must be renewed