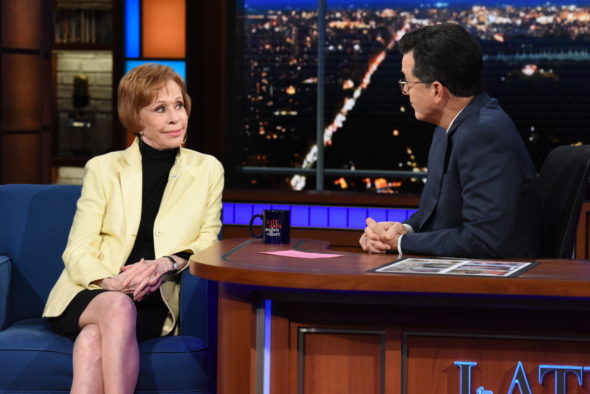 Better Call Saul has landed a big name to guest star in its final episodes. Carol Burnett (above left, with Stephen Colbert) will appear on the series when it returns with the second half of season six on July 11th.

“Six-time Emmy(R) Award-winner Carol Burnett will appear as a guest star in the sixth and final season of Better Call Saul, portraying a character named “Marion.” In addition to Burnett, as previously announced, Bryan Cranston and Aaron Paul, will appear reprising their Breaking Bad roles of “Walter White” and “Jesse Pinkman,” respectively, as the show draws to its conclusion. The series, produced by Sony Pictures Television, returns for its final six episodes beginning Monday, July 11 at 9:00 pm ET/PT on AMC and AMC+ with the series finale on August 15. The final episodes will conclude the complicated journey and transformation of its compromised hero, Jimmy McGill (Bob Odenkirk), into criminal lawyer Saul Goodman.

Said Burnett: “I’m thrilled to be a part of my favorite show.”

The series ended the first half of its current sixth and final season as the #1 acquisition driver in the history of the AMC+ streaming service and the #3 cable drama for the current broadcast season in key demos. The mid-season finale on May 23 delivered more than 2.2 million viewers in Nielsen live+3 ratings, as fans tuned in to see the conclusion of Kim (Seehorn) and Jimmy’s elaborate plot against Howard (Fabian) and experienced a pulse-racing surprise in the episode’s final moments.

Since its season premiere, Better Call Saul has generated more than 17 million engagements across social platforms, ranking as the #1 drama on broadcast and cable for conversation and organic search and the #1 cable drama in owned social engagement and content shares, according to data from ListenFirst.”

What do you think? Are you excited to see Burnett on Better Call Saul?

We really need a page to go to that has a list of the shows and what night they are on or premiere, like the old TV digest. I stream everything now, but the series that release shows weekly, like Paramount Disney and AMC+, I’m not sure what days the new episodes air. I also lose track of what shows I’m interested in. I do have Sling, so I can set some shows to record, but I need a daily ledger I can look at.