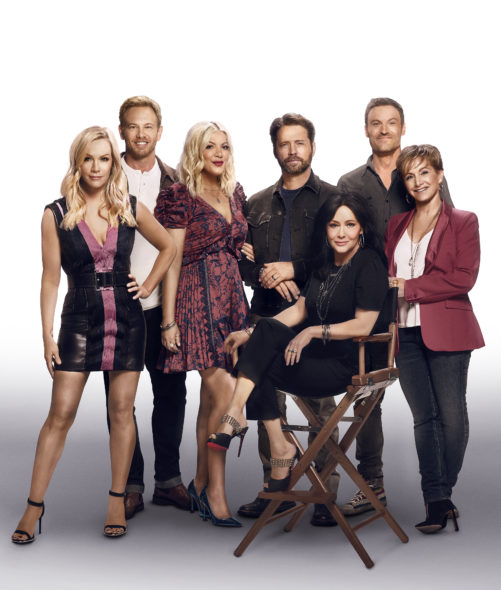 In the new BH90210, Priestley, Doherty, Garth, Ziering, Carteris, Green, and Spelling play highly fictionalized versions of themselves, rather than their respective Beverly Hills, 90210 characters. What’s more, the new series does not acknowledge the existence of The CW reboot.

Developed by Chris Alberghini, Mike Chessler, Spelling, and Garth, BH90210 follows Spelling, Garth, Doherty, Priestly, Ziering, Cateris, and Green, as they decide to revive Beverly Hills, 90210. Rolling out the revival creates more soapy drama than is present in the show-within-the-show. When first loves, old flames, friends, and enemies reunite and try to pick up where they left off, anything can happen.

Series Finale:
Episode #6 — The Long Wait
As the cast celebrates the wrap of the pilot, the looming news of a pick-up from FOX keeps them all on edge. Ian realizes his relationship with Anna might be a little too casual, Jennie thinks Wyatt might be in too deep, Tori gets frustrated with Nate, and Shay drops a major bombshell on Brian. Meanwhile, Jason and Camille come to a realization about their marriage, Gabrielle introduces her husband to Christine, and Shannen stresses over the future.
First aired: September 11, 2019.


What do you think? Do you like the BH90210 TV series? Should this FOX TV show have been cancelled or renewed for a second season?

I hope more episodes are made! Netflix? Hulu?

I was really looking forward to the next season. Old friends that I hadn’t seen in awhile would get together to watch. Loved having that feeling again

I just saw on Brian Austin Green’s IG that he confirmed no season 2. 🙁

Not surprising. The reboot just wasn’t a very good show. Jennir and Tori are just so unlikable.