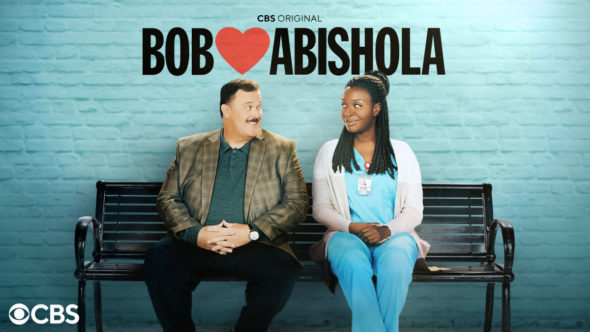 Last year, Bob ♥ Abishola was CBS’ highest-rated new scripted TV series. How will this romantic comedy perform in year two? Will it experience the dreaded sophomore slump and lose its way and its audience? Will Bob ♥ Abishola be cancelled or renewed for season three? Stay tuned. *Status Update Below.

Bob ♥ Abishola (read as “Bob Hearts Abishola”) stars Billy Gardell, Folake Olowofoyeku, Christine Ebersole, Matt Jones, Maribeth Monroe, Vernee Watson, Shola Adewusi, Barry Shabaka Henley, Travis Wolfe Jr, Gina Yashere, Bayo Akinfemi, and Anthony Okungbowa. Bob (Gardell) owns a very successful compression sock factory in Detroit and runs the business with his mother (Ebersole), his sister (Monroe), and his younger brother (Jones). The stress of the job lands Bob in the hospital with a heart attack and he falls in love with his cardiac nurse named Abishola (Olowofoyeku), an immigrant from Nigeria. She came to America with her young son (Wolf Jr.) and they live with her Auntie Olu (Adewusi) and Uncle Tunde (Henley). Despite their very different backgrounds and her initial lack of interest, Bob is determined to win Abishola’s heart.

For comparisons: Season one of Bob ♥ Abishola on CBS averaged a 0.75 rating in the 18-49 demographic and 5.96 million viewers.

What do you think? Do you like the Bob ♥ Abishola TV series on CBS? Should it be cancelled or renewed for a third season?

How old is radiance still carry this to a fourth season is unreal. But then again people have nothing else better to do but sit in front of TV and watch anything that is shown to them. This is a perfect example of make anything people watch anything.Doubt this will make another season this is it

Safe to say that CBS network prematurely renewed the show for third season. It’s only gonna go downhill next year! Got another year of this garbageCancel better shows after the first year and the show is going to get a third season good grief

Both my wife and I were extremely surprised and thrilled by the strong story blending humor, love and awkward situations with different ethnic views of an unexpected love story between two completely unique persons in Bob Loves Abishola. The cast is perfect in each environment of the hospital, workplace or each family residence. I await with baited breath the humor gems coming from all the characters as they each bring so much to the show, no one is any less a talented person than the other. The writers deserve special recognition for bringing out the best in everyone. I look… Read more »

Are you kidding me? It’s not even close it’s boring it’s mundane and it’s repetitive. Just like other shows Chuck Lorre produced.

I think Bob loves Aboshla, should be renewed. It shows how people of different backgrounds and color can unite. And there is no swearing or sex, just talking about love and how it is handled in as a learning good clean life.

This is a great show. Great actors great writers. Everything just the best. New and different than the usual sitcoms.

This is a GREAT sitcom…witty endearing clever and hilariously funny. Some episodes are better than others but there’s always something to laugh at and anyone will find something or someone to relate to. Some of the Nigerian stereotypes are way over the top or from a 1980s immigrant standpoint but it makes for good TV. Also, you’d have to be a Yoruba tribe Nigerian to get some of the jokes but overall it’s fantastic. You can see Gina Yashere’s (Kemi) comedic influence in a lot of it. Fantastic show and should be a keeper.

It definitely should be renewed!

Love this show mike and molly actor is so funny comedian guy. Look forward every episode.

this show is very well written. The cast are all very good, which makes a good team….I would love to see the process of how the writing takes place….to come up with such fluid lines for each character to say on such timing….love the show I watch it as much as possible I DVR it, all the episodes.

Wonderful show. My wife and I love it. The characters are so great and funny, a wonderful cast. We are always laughing thru it. Good for the Soul. We are also a mixed couple, and get a kick out of that too. Definitely should have a 3rd season or more.

Are you really watching this show? or are you mistakenly watching something else and saying this is that show.

My family looks forward to watching Bob Hearts Abishola every week! Great character development, and it has what it takes to make a sitcom successful-a terrific ensemble. Standouts are EVERYONE! Each character seems to have his or her spotlight each week and they make you laugh. There’s so much to like about the supporting cast-but at the heart is Bob and Abishola navigating their love for each other in ways that examine very different cultures and norms-this is a clever comedy that offers so much love and learning! Definitely worth a watch if you want something new and different in… Read more »

Funny love it watch every week such a great show so happy back on.