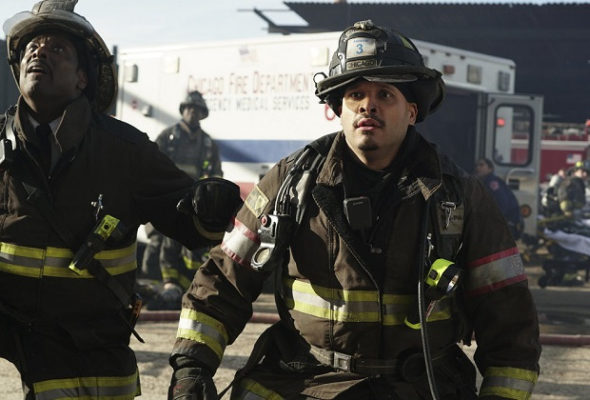 I love this show so much please keep it forever

Love this show. Actors are so real as if in real life situations. We enjoy every Year’s season.

Pleas continue to renew all the Chicago series, especially Chicago Fire. This show is very realistic, I should know, as I’m a former emt/firefighter myself. Great shows. Keep up the good work Mr Wolf. Thanks NBC for renewing. They’re the main reason I watch your network.

I’m a Chihard loyal fan since beginning. Chicago Fire is the best wth lots of action, romance and drama.This season was the best with Dawsey and Stellaride. Chief Bowden is a good leader – Casey and Severide rock under him. All major characters create a great team and family atmosphere. Keep the future seasons coming.

great show…why are you trying to cancel all the good shows?

Do not cancel…love this show

My favorite ever! Perfect blend of action ,drama and romance. Must continue indefinitely. I have watched all seasons a few times.

Best series on TV to date! I watch every rerun and look forward to every show weekly. Please renew them all! Chicago Fire is my favorite! Please renew for many more years to come!

Please, please DO NOT cancel Chicago Fire. I’ve been a loyal fan since the premier and if I miss a couple I just stay up till 2am binge watching till I’m caught up. Severide and Kitt are just starting a relationship after so many teasers and I wanna see them fall in love and get married like Casey and Dawson.

you bet great show and needs to continue. Look forward to it every thurs. night. We need more shows like this one. keep it going for many seasons.

Love this show. Good drama and house 51 knows how to have it together and knows family. Very good. Good actors and fit their part well wouldn’t miss it and haven’t since it started, definetly a season 6 and then some.