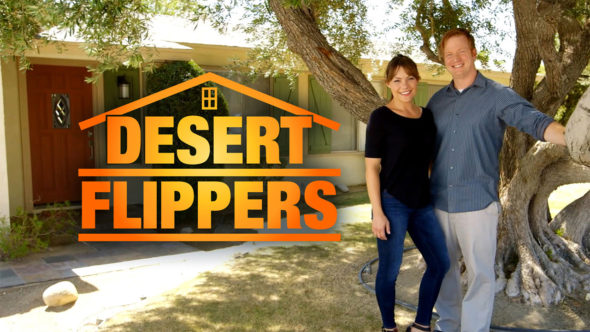 Desert Flippers is coming back for a third season soon. The renovation series has been renewed for season three this week! Viewers will see 14 new episodes with a premiere this summer.

HGTV revealed more about the renewal of this series in a press release. Check that out below.

“Real estate and house flipping experts Eric and Lindsey Bennett will showcase more So-Cal home renovations as HGTV renews Desert Flippers for a third season. The series’ sophomore run attracted more than 11.7 million viewers and delivered a nine-percent increase for P25-54 over its debut season. Each episode follows the couple as they transform rundown homes in sunny Palm Springs into stunning desert retreats – all while raising three small children. Season three will premiere with 14 fresh episodes in July 2018.”

Are you a fan of Desert Flippers? Tell us what you think.

Love this show! Eric, Lindsey and Uncle Mike are all real people. They don’t come across as stiff and scripted. Funny, witty and talented trio. I’m just hoping they will be coming back for season 4 and more.

Love this show. So glad it’s coming back.

Love the drama free show! This is a married couple with a positive attitude that doesn’t bash one another. Refreshing to watch and refreshing modern colorful creative designs in a beautiful location. Looking forward to the next season and reruns also.

These two are a great duo (and Uncle Mike) for this show! No bickering or drama!!!! They make the process of being in chaos while redoing a home look so fun! Their loving interaction with each other is priceless!

I love Desert Flippers. They are such a nice couple. I love 50s architecture and decor. I’m glad this show is part of the flipper shows on HGTV. I love HGTV. I watch your shows continuously and have implemented ideas in my house because of HGTV. Thank you. Rose

Can anyone tell me what the name of the “warm gray” exterior paint color is?

I’m asking the same thing the others are since they’ve not gotten a reply. WHAT HAPPENED TO UNCLE MIKE? I enjoyed him being on the show as well.

I love “Desert Flippers” Lindsey and Eric are so flipping cute together. They give a very real and loving vibe for viewers. I also love uncle Mike, he is great with them and precious with the kidos. I have missed him on the new season. WHERE IS UNCLE MIKE??