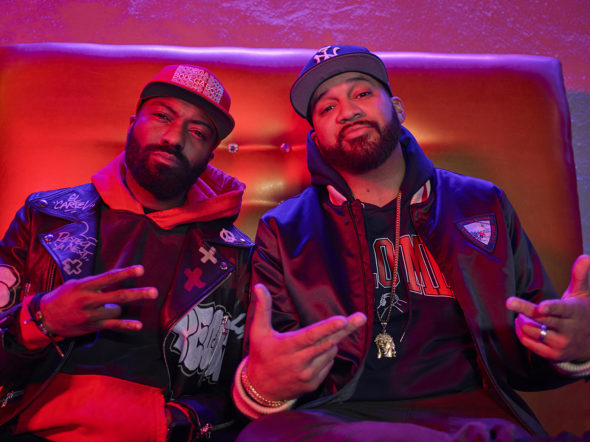 Desus & Mero is returning for its fourth season this week on Showtime. Hosted by Desus Nice and The Kid Mero, the series provides a comedic look at topics of the week. Some of the celebrity guests set to appear on the late-night talk show this season include Mark Wahlberg and Tom Holland, Pusha T, and Damson Idris.

Showtime revealed more about the upcoming season in a press release.

“DESUS & MERO will return to SHOWTIME for season four on Thursday, March 10 at 11 p.m. ET/PT, with Denzel Washington joining Desus Nice and The Kid Mero in studio for the season premiere. Returning to its original weekly schedule with new episodes dropping every Thursday night, the WGA Award-winning and Critics’ Choice-nominated late-night series features the duo giving their take on the day’s hot topics and chatting with guests at the intersection of pop culture, sports, music, politics and more. Upcoming guests this season include Mark Wahlberg and Tom Holland, Pusha T, and Damson Idris. J.D. Amato (The Chris Gethard Show) joins as series showrunner and executive producer for season four.

Longtime acquaintances Desus Nice and The Kid Mero reconnected online in the early days of Twitter, where they unleashed their potent personalities and found themselves kindred spirits. That led to stints on Complex and MTV, the Bodega Boys podcast, and a daily late-night show on Viceland, developing a feverish following. The quick-witted duo brings a distinct voice to late night, delivering smart and comedic commentary on any and all topics, that keeps audiences buzzing. Their life advice book, God-Level Knowledge Darts: Life Lessons from the Bronx, was released by Random House in 2020 and became a New York Times Best Seller.”

What do you think? Are you excited about the return of Desus & Mero on Showtime?

Hell Yeah!!! Waiting to watch it as I write this!