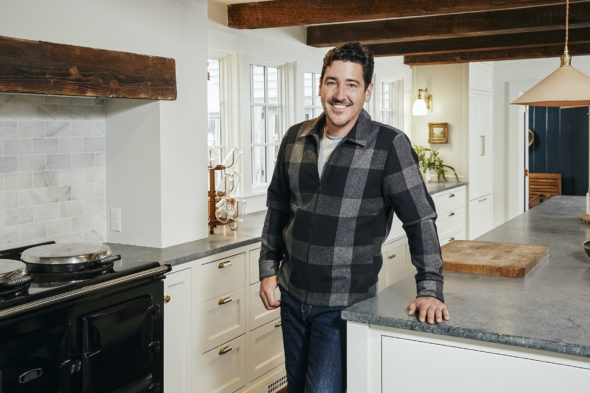 There’s a “new kid on the block” coming to HGTV. Singer Jonathan Knight is set to star in a brand new series that arrives in March. Farmhouse Fixer will see Knight showing off his renovation skills and helping others in the process.

HGTV revealed more about Farmhouse Fixer in a press release.

“Singer Jonathan Knight may be best known as a member of the Grammy®-nominated band New Kids on the Block, but in the new HGTV series Farmhouse Fixer, he’ll share his renovation know-how by meticulously restoring centuries-old New England farmhouses that deserve a second chance. Premiering Wednesday, March 3, at 9 p.m. ET/PT, the six-episode series will feature Jonathan, who has renovated more than 200 houses, as step by step he carefully preserves the original craftsmanship and historic charm of classic homes while he also modernizes layouts, updates interiors and gives his clients endless reasons to cheer.

“Restoring the American farmhouse is not just a hobby for me—it’s my passion, my obsession and I’ve been doing it for more than 25 years,” said Jonathan. “It’s so easy to just go knock down an old house. It’s way harder to renovate them so that families can enjoy them for years to come. That’s the reason this work is so worth it.”

To start the season, Jonathan will give new life to a 1700s New Hampshire farmhouse with help from his designer and friend, Kristina Crestin. To stabilize the property, Jonathan must remove a sinking addition on the home but, on the plus side, he will convert a backyard tool shed into a stunning potting bench and chicken coop. In future episodes, he will complete custom renovations for additional old homes, including creating an enviable chef’s kitchen and a built-in seating area for a large dining room. During the season, outdoor projects will include everything from a goat enclosure to raised garden beds.

“I love a good old farmhouse,” said Jonathan. “To me, being on a farm is a way of life. It’s the real deal. Old farmhouses are disappearing off the landscape, but these are American treasures that should be saved.”

What do you think? Will you tune in to watch Knight on Farmhouse Fixer on HGTV?

Is he married to that Christine? Don’t think he was at the beginning so turn off here.

Love Jonathan is special he is so natural in his farmhouse fixer.. So happy he is returning in March 2022.. NKOTB he looks so handsome believe it or not he reminds me of my handsome father..

I enjoyed this show a lot. Hope it returns for another season.

I have enjoyed this show so much. Jon Knight shows his passion for his work by renovating these precious American treasure farmhouses. I want to see mire of his shows. Just Fantastic!

I live in Wisconsin and I find farmhouse fixer very refreshing AND worth renewing, quite frankly I am bored with the property brothers series. Just too much, nice guys but drop one of their #hows, please. Same old same old. Love the brother and sister show also refreshing . Just the same way I really like farmhouse fixer. They both are great shows and would hate to see either one of them not being renewed.

I absolutely love this show! Growing up in upstate NY I’ve been fascinated by old farm houses since I was a kid. And watching Jonathan and Kristina transform these homes is like a breath of fresh air from the other home renovation shows on HGTV. I wish I were Jonathan’s neighbor! Look forward to a second season.

Really enjoy this show , especially after purchasing a farm in the Berkshires and trying to bring it back to life in spite of COVID . Love Jonathan’s down to earth vibe and enthusiasm for his projects . Wish he would come visit us and see if our farm would be a fit for the show . ( lots of choice projects ). Our family ranges in age from 80 to 6 years and expecting a new farmer ( baby girl) in September . We are so loving this new show and hope it becomes a staple on hgtv.

I love this show! Someone pick it up for season 2!

I love love love farmhouse fixer. It is definitely my new favorite show. Jonathan really knows what he’s doing and his designer is great as well. I hope they do another series since I’ve already watched this one 3 times and not even close to being bored. I just need MORE PLEASE!!!!