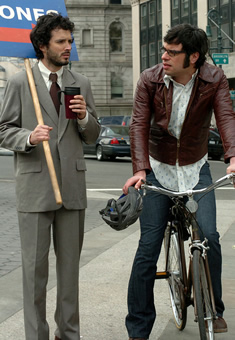 To no real surprise, Flight of the Conchords has been grounded. But, unlike most other TV series, the cancellation wasn’t the network’s idea.

Flight of the Conchords is a unique comedy and music series that follows a two-person novelty band from New Zealand. It stars Bret McKenzie and Jemaine Clement as fictionalized versions of themselves, as well as Rhys Darby, Kristen Schaal, and Arj Barker.

The series debuted in June of 2007 and ran for 12 episodes on HBO. Conchords was renewed for a second season in August 2007 and was expected to begin airing in 2008. Production was delayed until September 2008, in part because of the writers strike. So, season two episodes weren’t broadcast until January 2009.

Clement and McKenzie were interviewed back in August 2008 and indicated that season two would probably be the end. McKenzie commented, “The second series [season] seems to me like it would be a good end to the show.”

In July 2009, HBO executives indicated that they wanted a third season of Conchords and were waiting for the duo to do it. The head of HBO’s programming, Michael Lombardo, said, “We’ve told them we’re ready to go for a third season.”

A few months later, Clement expressed doubts about a third season and contemplated either a shorter season or a special.

Now, the duo has made the show’s fate official — they’ve cancelled the series. On their website, they posted,

Bret, Jemaine and James (co-creator/director) said “we’ve noticed the less we say about the future of the show, the more people want to talk about it, so in an effort to reverse this trend we are today announcing that we won’t be returning for a 3rd season. We’re very proud of the two seasons we made and we like the way the show ended. We’d like to thank everyone who helped make the show and also everyone who watched it. While the characters Bret and Jemaine will no longer be around, the real Bret and Jemaine will continue to exist.

What do you think? Are you sorry that Conchords won’t be back for season three? Would you be open to a special of some kind?

Maaaaaaaaaaan. I loved this show so much. I lost 12 girlfriends in the process because I never missed an episode. Does that math add up? I’ll tell you what does add up: FLIGHT OF THE CONCHORDS. You guys rocked and brought joy to my life with every episode. I think we’re all a little freaky baby. Man oh man I’m so hot for Mel.

Please bring it back. I can’t wait much longer for a comedy that makes me laugh so hard I can’t breathe.

This is the most disgusting news i’ve ever heard. This show was better than 90% of the garbage HBO has out now. I want to hang myself from a tree and swing there lifelessly to show HBO how depressed this makes me. My reproductive organ will never get hard again. Thanks a lot

Flight of the Conchords is absolutely hilarious! They should definitely bring this show back for at LEAST a third season! No matter what, they should keep doing what they do, cause they do it well!

I am super sad this was cancelled. It was so different from so many tv shows around… so I am really dissapointed with you Brett!! Its your fault. Sad I must move on.

what the heck do you mean, “to no great surprise”?!
this was one of the best shows on TV! And it got nominated for a tonnn of awards. I think it could do w/ one more season.

What’s the big idea cancelling 1 of the best shows ever?!

I don’t believe it but it probably is extremely difficult to come up with such unique writing week after week so I’m trying to understand.Anyway hope to see the guys in their future.

this is very disappointing but I can understand ending it the way they did, it does take a lot to do all of those songs and I think fans would be disappointed if the show ended on a low note, so farewell Conchords!!

Totally agree Plug – – My favorite show EVER…and really well written. I will be wicked bummed out if this is the case. I need some more! I NEED SOME MORE!

im hoping this is just a sick joke, because this is the best show on tv.

This was one of the best comedy series EVER… Bret and Jemaine are a very funny duo, and I’m a big fan of their work (albums, tv series, BBC Radio Series, …) and it’s a pity that they decided to wrap up the series… I’m sure it’s for the best, though… They probably didn’t want it to turn into a big ol’ boring clich