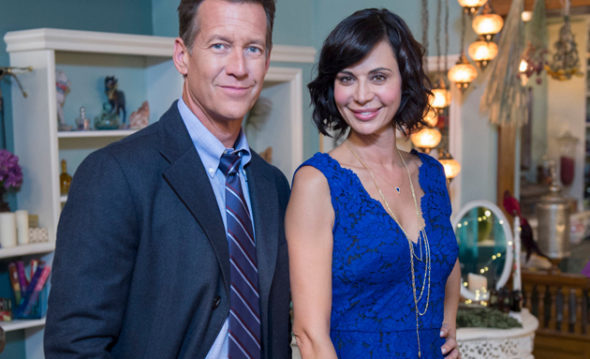 Hallmark Channel revealed more about the new season of Good Witch in a press release.

“Good Witch returns for more magical adventures in the bucolic burb of Middleton when season seven premieres Sunday, May 16 (9:00 p.m. ET/PT), on Hallmark Channel. Based on the The Good Witch movie franchise that is the most successful in the network’s history, the series stars Catherine Bell (Army Wives, JAG) and James Denton (Desperate Housewives, Devious Maids). Since the first movie 12 years ago, Cassie Nightingale has become a character that Hallmark Channel viewers have fallen in love with and look forward to welcoming into their homes. Sarah Power (Killjoys), Catherine Disher (Abby Hatcher), Kylee Evans (The Strain), Katherine Barrell (Wynona Earp), Marc Bendavid (Murdoch Mysteries) and Scott Cavalheiro (Carter) also star.

“More than a decade after first meeting Cassie and the colorful characters of Middleton, viewers continue to be enchanted by their stories,” said Michelle Vicary, Executive Vice President, Programming, Crown Media Family Networks. “The new season has more magic, love and adventure in store for viewers than ever before and we’re excited to share it with fans.”

The velvet pouches of soil discovered by Cassie (Bell), Abigail (Power) and Joy (Barrell) at the end of last season mark the start of a new Merriwick mystery for the cousins to unravel that leads them reflecting on their pasts and how learning how certain life events have impacted who they are now. Alongside the usual Middleton fun viewers have come to love, new relationships, personal challenges and romance are in store, making season seven one fans will never forget.”

Check out the trailer for Good Witch season seven below.

What do you think? Are you a fan of the Good Witch TV series on Hallmark Channel? Do you plan to watch the new season next month?

Best show on hallmark channels . What a shame to let this show end. Was such a peaceful, beautiful, and family experience with so much love.

The Good Witch was such great series. To take it away it’s like taking away the mystery and Magic. Hallmark channel need to find a way to keep the series going or make it a yearly movie. I look forward to watching all the different episodes and when it was just smaller movies in the beginning. I really don’t know why Hallmark channel is thinking. The rating System sucks. We all need that little bit of magic. I’m not a fan of all the other series that Hallmark Channel offers. The mystery channel is good on Hallmark network. FIND WAY… Read more »

The Good Witch is such an enchanting show. I love how Cassie led everyone she came in contact with and met the with positivity, love and light. I will miss this great show and hope there will at leat be movies again at the very least for Halloween.

My sister watched the Good Witch ….loved the house/decor. As far as the characters, she tested her tolerance to watch the whole show without going into a diabetic coma by the end of the hour. We agree with Ed on page 1.
Goodbye Good Witch.

‘ I wish I could live in Middleton. THAT WOULD BE SO AWESOME! Please continue to bring us this wonderful storyevery week.

It is one of so few clean TV series.
keep it coming for another 10 years.

Should have 10 season just renew the show already

I love Good Witch Hope it has more seasons

One of my favorite shows…so entertaining and an escape from this crazy stressful world. Love it!

Love love love Good Witch.best show ever and hope to see many more seasons to come.

I love Good Witch. This is one of my favorite shows on hallmark

Yes yes they are all. Back