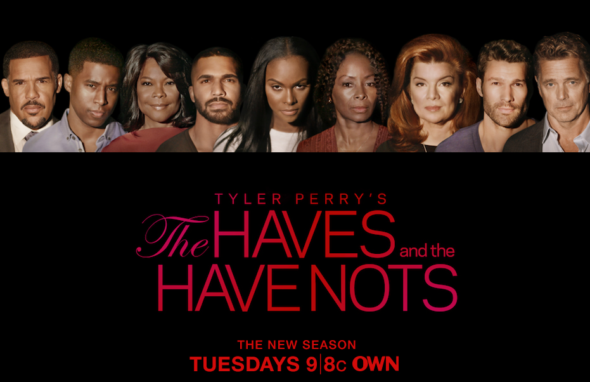 Despite declining ratings, Tyler Perry’s The Haves and the Have Nots TV show has remained OWN’s highest-rated scripted series. So, it’s no surprise that the show hasn’t been cancelled. In January of last year, OWN ordered an additional 44 episodes which we’ve confirmed will make up season five. Will that be the end? Will The Haves and Have Nots be cancelled or renewed for a sixth season? Stay tuned. *Status update below.

A primetime soap opera crime thriller, The Haves and the Have Nots stars Tika Sumpter, Crystal Fox, Renee Lawless, Tyler Lepley, Aaron, Peter Parros, Angela Robinson, Gavin Houston, John Schneider, Brett Davis, Presilah Nunez, and Nick Sagar. The OWN drama centers on the complicated dynamic between the rich and powerful Cryer family of Savannah, Georgia and their hired help who work in their opulent mansion. Season five kicks off with everyone dealing with the fallout of scandal, including some life or death consequences.

For comparisons: The fourth season of The Haves and the Have Nots on OWN averaged a 0.66 rating in the 18-49 demographic with 2.523 million viewers.

What do you think? Do you still like The Haves and the Have Nots TV series? Should it be cancelled or renewed for a sixth season?

*9/11/18 update: The Haves and the Have Nots has been renewed for a sixth season. Details here.

*1/8/19 update: Our contact at OWN tells us that there are 11 episodes remaining in season five (bringing the total to 44 episodes) and that season six will air later in 2019.

This information is not current..Will Have And Have Nots be broadcasted for 2020-2021 season?