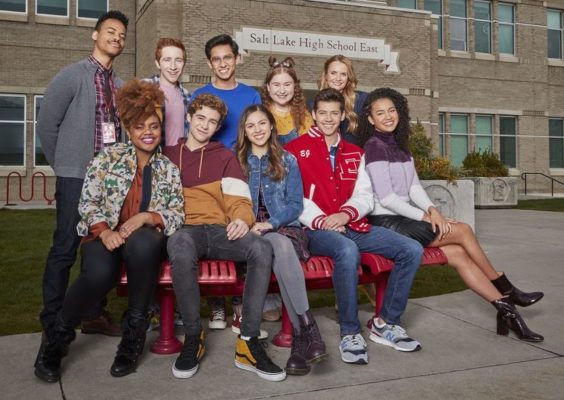 Ricky (Bassett) is a charismatic teen auditioning for the musical so he can win back the heart of his ex-girlfriend, Nini (Rodrigo). She has just returned from summer theater camp with a new boyfriend – and the same insecurities that keep her from owning the spotlight. E.J. (Cornett) is Nini’s new beau and he sees life as a competition with Ricky as his top foe.

Kourtney (Reneé) is Nini’s best friend and a fashionista who’s equally obsessed with makeup tutorials and feminism. Ashlyn (Lester) is E.J.’s cousin and an aspiring songwriter. Big Red (Saperstein) is Ricky’s best friend, a dude who can best be described as a spiritual descendant of Bill and Ted.

Gina (Wylie) is a transfer student and a diehard theater kid with plenty of secrets. Carlos (Rodriguez) is the student choreographer who has already memorized his Tony Award speech.

The characters count down from auditions to opening night of their school’s first-ever production of High School Musical: The Musical. They have budding romances, faltering friendships and harsh rivalries as they experience the transformative power that only high school theater can provide.

What do you think? Do you like the High School Musical: The Musical: The Series TV show on Disney+? Do you think it should be cancelled or renewed for another season?