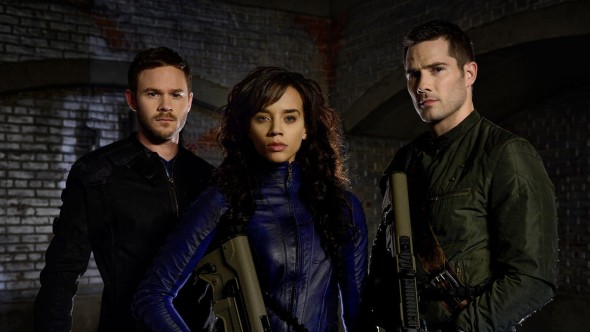 TV show description:
This science-fiction TV series follows a fun-loving, hard-living trio of interplanetary bounty hunters sworn to remain impartial as they chase deadly warrants throughout the Quad, a distant system on the brink of a bloody, multi-planetary class war.

Dutch (Hannah John-Kamen) is a gorgeous, complicated, and deadly flirt. Bold and fun-loving on the surface, she has a unique gift for earning people’s trust and respect — regardless of their class. But under her banter and protective flirtations, there is pain, maturity, and a deep solemnity. She has always withheld a part of herself — a history of which she is deeply ashamed.

On top of being a born soldier, D’avin (Luke Macfarlane) is handsome, uber-masculine, sarcastic, and incredibly loyal. He dreamed of enlisting since boyhood, and his hard-won expertise in tactics, maneuvers and hand-to-hand combat make him a vital asset to the Killjoy team.

John Jaqobis (Aaron Ashmore) is dyslexic with learning and reading disabilities and was labeled as “stupid” all of his life. But make no mistake, he is not. Give him any mech, any tech, and he can fix-it-build-it-fly it. Just don’t ask him to read the instructions — or to believe that he’s actually intelligent. He has some self-esteem issues but one thing he’s completely sure of is his devotion to his fellow teammates.

Series Finale:
Episode #50 — Last Dance
Dutch uses Khlyen to bait The Lady and finds herself in the midst of a final, epic showdown.
First aired: September 20, 2019.

What do you think? Do you like the Killjoys TV show? Do you think it should have ended or been renewed for season six?

Looking forward to the next season, keep up the great work.

Please renew this awesome show!! So entertaining and intriguing. I really like the universe they have created.

I love Killjoys. Can’t wait for next season.

One of my top three favorite shows all year. Really look forward to each episode.

I think Killjoys is a great syfy show. I hope it is renewed. i think Dutch is so kickass!!

I’m a huge fan! Would love to see another season!. Tired of seeing reality shows get renewed season after season and fabulous creative new shows such as Killjoys get the plug pulled after just one, Please renew 🙂

I LOVE THIS TV SHOW! IT IS SO FUN AND ENTERTAINING. DON’T CANCEL!!!

Love it…gets better and more exciting with each episode. Love the repartee between the characters. I really want more!

I think it should be re-newed. Good story line. Very entertaining.

I saw it this past weekend and it was really cool! Hannah is hot and a good actress. I can’t wait to see how the story line plays out. I want to see the next episode already!!!

Just viewed the series premiere and I like it so far. I am looking forward to see how the storyline develops.

Happy to see Aaron Ashmore in a sci – fi series again. He played the Jimmy Olsen character pretty well, & gave dimension to a character ( Steven Jinks ) that could’ve been a one – note character in Warehouse 13.

That she is.
The series is made by some of the same people who do ” Orphan Black “, she looks like Tatiana Maslany ( a little ). Maybe that’s why they chose her ?

The comparison to Cowboy Bebop is a good one, I hadn’t thought of that. Each with their private dark history.

I liked it, but the writing seemed a bit disjointed. It’ll be on my Friday list for now

It just came out of left field. It is the lighter, sassier companion ( ? ) to the somewhat darker, more serious ” Dark Matter ” series.
Syfy is trying to redeem itself after a glut of reality / occult / paranormal shows – & WRESTLIN’ !! 🙂

Reminds me in many ways of Firefly & the anime series Cowboy Bebop ( One of the few anime series I followed w / any level of interest ) with maybe some sprinkles of Red Dwarf.
It is like pseudo – serio – comic relief to Syfy’s ” Dark Matter ” series* ( *Which reminds me of Stargate : Universe ). It deserves a chance.