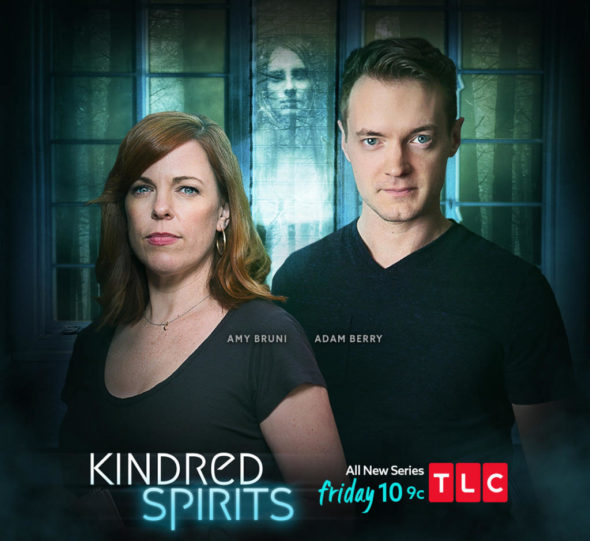 Would Anne Shirley be proud or horrified? The Kindred Spirits TV show has been renewed for a second season on TLC. The ghost-hunting series centers on Amy Bruni and Adam Berry who consult with families experiencing paranormal activity in their homes.

What do you think? Have you watched the first season of the Kindred Spirits TV show? Do you plan to check out season two of this TLC TV series?

I wish it would come back, as well as Paranormal Lockdown and Ghost Hunters!

I love the show very entertaining and have been waiting patiently for its return. Get rid of two boring shows – 600lb life and Yes to the dress they have been on all day long week after week and bring on Kindred Spirits. Love the show

P.S. Kindered Spirit is the only reason why i keep the TLC chanel. Once other viewers find out that Amy and Adams have their own ghost show it will be as popular as Ghost Hunters.

Families, please do not follow some of their advice. I just watched an episode where someone was scratched and they said it was an accident by a child “spirit.” So they encouraged the family to invite the child spirit in to live with them. This is a dangerous thing! You just invited a demon in and you and your offspring could be marked. I am fine watching this for entertainment but this advice crosses the line. Ancient Chritian and Jewish texts answer all questions regarding this phenomenon. You do not need an outsider to banish evil within. You need God… Read more »

Yes Love the show and can’t wait until the new shows start.TLC smart to renew them

I’m sooooo Glad to see Kendred spirits returning in the fall . This is the only ghost hunting show that is true to fact . .

Kindred Spirits, Paranormal Lockdown, Ghost Brothers and sometimes Ghost Hunter are the best paranormal shows on TV. Looking forward to Kindred Spirits season two. Mountain Monsters is a bad comedy, predictable ever show-someone has a video or still of something, let’s go hunting with “shotguns-obviously looking for rabbits, someone falls -after seeing something , monster breaks out of trap, on to next location

I love Kindred Spirits and paranormal lockdown, and ghost brothers, look forward to watching these shows , can’t wait for season 2 to start!!

i loved them on ghost hunters but i really love how personal they are with the families now. i will always miss the ghost hunters gang but i truly love the feel of this show. please keep them coming.

Love your comment you took the words out of my mouth.

Love Amy and Adam. I loved them together on ghost hunters, but they are even more awesome flying as “kindred spirits.” I always knew that they had a special bond….they really do feed off of each other…..glad they are doing Season 2!!!!!!!

They are amazing, have been following them for years now. Looking forward to the new season!

I love Amy and Adam . Can’t wait till their return.
Would love to meet them in person.

Of course, yes. I will watch the next season.