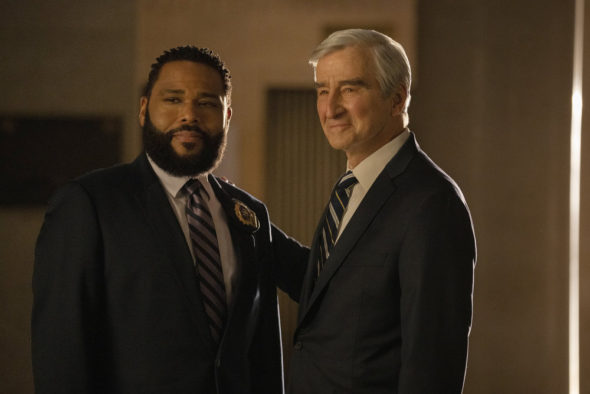 When the 22nd season of Law & Order kicks off this fall on NBC, there will at least one notable absence. Anthony Anderson, who starred in three seasons of the show’s original run and the first season of the current revival, has opted not to return for the 2022-23 run.

According to a report, Anderson only signed on for one season of the Law & Order revival. The actor wanted to support executive producer Dick Wolf’s relaunch of the series and always planned to stay just one year. There was no indication in the recent finale that his character would be departing.

Meanwhile, Waterson’s future with the series is unclear as he also signed just a one-year contract. The actor did appear onstage at the recent upfront presentation of NBCUniversal so that would seem to be a good sign that he will be back.

Season 22 of Law & Order will debut at some point this fall in its regular Thursday night timeslot. A specific premiere date will be announced this summer.

What do you think? Have you been watching the revival of the Law & Order TV series on NBC? Are you disappointed that Anderson isn’t returning? Are you hoping that Waterson will be back?

I can’t stand the banter between Donovan & Anderson every episode. The arguments seem very put on, and not believable.
Donovan’s character is like a bad impersonation of a New Yorker, and Anderson’s character always acts outraged by everything he says.
The show is just awful!!!!!!!!!!!!

With all due respect the new L&O is terrible. The casting is bad.
Here’s some suggestions:
1. Angie Harmon as Executive ADA (McCoy’s old position)
2. Kathryn Erbie as Captain
3. Remold Jeffery Donovan’s character to be more contemplative and less of a thug (not buying it.)
4. Jason Bateman balancing Donovan’s character.
5. When McCoy leaves, move Harmon up and bring back Cutter as the Executive ADA.

I like both actors, especially Sam Waterston. I hope Sam returns. I have always been a fan of this franchise. I like Anthony as well, but understand his desire to do something else.

Without Waterston, the show is finished. The only way to save it would be to bring in Angie Harmon to replace him. Now that Anthony is gone, maybe they could go get Benjamin Bratt.

Just cancel this series. It’s awful. Only greed and the drive for more $$$ is what brought it back in the first place. It’s been PAINFUL to watch.