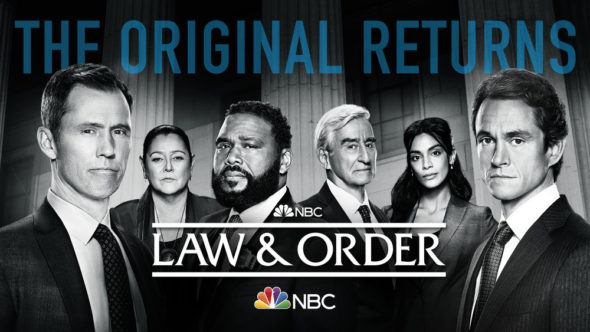 The Law & Order franchise has been extremely profitable for NBCUniversal. It was a bit surprising when the original version was cancelled back in 2010 but, given the way the industry has changed in the past decade, it’s no surprise that it’s been revived. Will the revival live up to viewer and network expectations? Could Law & Order possibly be cancelled again or, is it sure to be renewed for season 22 and beyond? Stay tuned. Status Update Below.

What do you think? Do you like the Law & Order TV series on NBC? Should it be cancelled or renewed for a 22nd season?

“Ham-fisted” is an apt description of the writing in this season of L&O. Please, NBC, put this sad attempt at a come-back behind you and end the series.

I love watching Law and Order and Sam Waterston as McCoy. Sure hope for season 22

The new cast took a little getting used to but I like it. Love seeing Sam Waterston. Look forward to watching the show every week, much more than L&O OC.

Probably good enough to be renewed if Sam Waterston wants to come back.

Really enjoying the new series. So glad to see Jack back in the saddle!

Glad see back on air such a great original series start great franchise. Other sucks but this so good look forward to seeing it every Thursday court and cop drama enjoy it and love it.