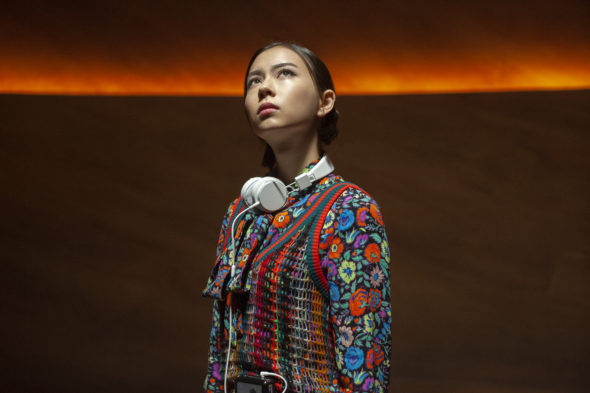 What’s in store for David Haller? Is the Legion TV show cancelled or renewed for a fourth season on FX? The television vulture is watching all the latest cancellation and renewal news, so this page is the place to track the status of Legion season four. Bookmark it, or subscribe for the latest updates. Remember, the television vulture is watching your shows. Are you?

An FX sci-fi drama centering on the X-Men character, Legion stars Dan Stevens, Rachel Keller, Aubrey Plaza, Bill Irwin, David Negahban, Jeremie Harris, Amber Midthunder, Hamish Linklater, Katie Aselton, and Lauren Tsai. The superhero thriller follows David Haller (Stevens). After being in and out of psychiatric hospitals for years, David met Syd (Keller), who helped him realize he wasn’t schizophrenic, but rather, in possession of incredible abilities. In Legion season three, David is at odds with all his one-time friends, so he teams up with a young mutant named “Switch” (Tsai), in hopes of tapping into her secret ability, in order to repair the damage he has caused.

The third season of Legion averaged a 0.12 rating in the 18-49 demographic and 335,000 viewers. Compared to season two, that’s down by 38% and 22%, respectively. Find out how Legion stacks up against the other FX TV shows.

Don’t spend this summer worrying whether FX will cancel or renew Legion for season four. The network announced this was the third and final season quite some time ago. Marvel chief Jeph Loeb says he thinks of the final season as the “end of the graphic novel,” but that if series creator Noah Hawley came to them with another story, he hopes FX would want to tell it. I’ll keep an eye on things and update this page with developments, so subscribe for free Legion news alerts.

What do you think? Is the Legion TV series ending at the right time? If it were up to you, would FX have renewed this TV series for a fourth season?

i just dont understand why they want to end this show ,there are still a lot of series in progress and they worth nothing ! I really want to believe that still hope to continue

There’s an obvious reason Noah Hawley is going to end this after 3 seasons and it has to do with the one character plot point from the comics that the show never touched on. David Haller aka Legion got his monicker from his multiple personalities. What makes Legion unique in the world of mutants is that each personality has his/ her own mutant powers. This is why Legion is considered the most powerful mutant ever despite being unstable. Granted the show touched on this subject a little with the whole Shadow King personality story but the huge reveal at the… Read more »