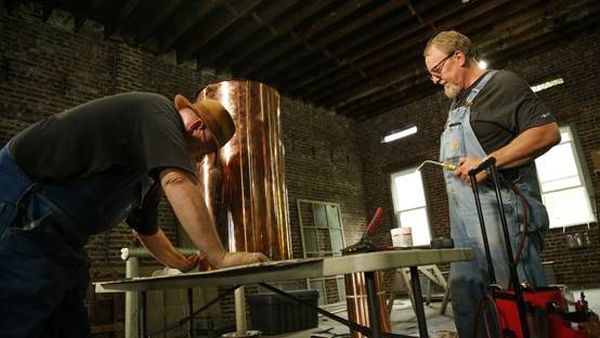 Get ready for more moonshine! Discovery Channel has announced that both Moonshiners and Masters Distiller will return with new seasons next month. Both shows follow the lives of present-day distillers.  Moonshiners is launching its 12th season, while Master Distiller is returning for season four.

Discovery Channel revealed more about the return of both shows in a press release.

A new season of MOONSHINERS, a real life look at the world of backwoods moonshining and of the distillers who produce some of the best tasting spirits in the U.S., premieres on Discovery Channel Nov. 9 at 8PM ET/PT, followed by all-new episodes of the ultimate booze-making competition series MASTER DISTILLER at 9PM ET/PT. An American tradition dating back to the Whiskey Rebellion of 1791 when farmer-distillers rebelled against new federal taxes on making liquor, moonshine has grown into its own multimillion-dollar shadow economy throughout Appalachia and become a continuing trend in popular culture. To the artisans who make it, moonshining is a multi-generational tradition and a proud part of their cultural history.

In season 12 of MOONSHINERS, it’s the rise of the shine economy as America’s favorite outlaws are tested like never before when inflation and supply chain disruptions hit Appalachia. Moonshiners must dig deep into their shared roots for secrets to surviving skyrocketing prices, while inventing clever new ways to make America’s favorite backwoods beverages and earn a tidy tax-free profit. For shiners, there’s a silver lining to be found in looking to tradition, as moonshiners during the Great Depression and other times of economic uncertainty have thrived in the face of adversity. Tennessee shiners, Mark and Digger face a determined law enforcement officer hellbent on halting their operation as they battle sky high prices for raw materials, such as corn; innovators Mike and Jerry recruit Solomon Sutton, son of infamous moonshiner, Marvin “Popcorn” Sutton, to help them devise new liquor recipes and stay ahead of the competition; to find a bigger market for his popular spirits, Louisiana moonshiner Richard moves his operation to Tennessee; and in Virginia, Tickle and Henry must find a new location for their largest ever thousand gallon still, as their partner Josh goes on the lam to avoid being caught by the law.

Then, in season four of MASTER DISTILLER, America’s top legal and outlaw distillers compete head-to-head to turn raw ingredients into authentic handcrafted spirits. This season, Judges Mark, Digger and Tim raise the bar with clever new competitions such as the big box store challenge where distillers must attempt to turn a discount store shopping spree into tasty high-proof spirits, a family competition where couples must test their shining skills along with their partnerships, and a Thanksgiving-themed contest where previous Master Distiller winners return to craft a 100-proof liquor recipe with flavors to match the holiday. Hosted by moonshine legends Mark, Digger, Tim, and Tickle along with guest judges at the top of their field, each episode will determine who has what it takes to be called Master Distiller.

Fans of both MOONSHINERS and MASTER DISTILLER can follow the conversation on social media with #Moonshiners and #MasterDistiller and by following Moonshiners on Facebook and Twitter for more updates.

MOONSHINERS and MASTER DISTILLER are produced for Discovery Channel by Magilla Entertainment.

What do you think? Are you excited to see new episodes of these reality shows on Discovery Channel in November?

YES! Glad it has been renewed and will be premiering soon! One of my favorite shows on TV!