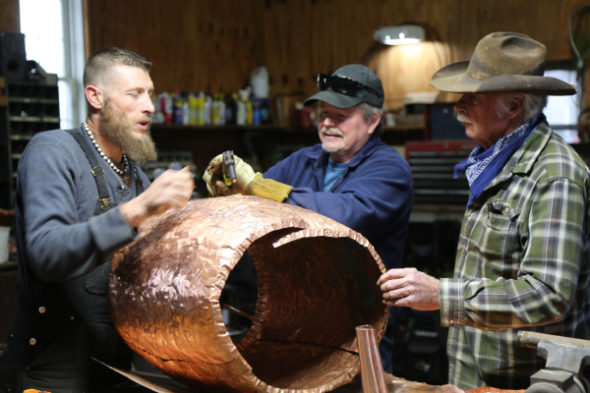 Discovery has announced two new liquor-related reality series that will premiere in April — Moonshiners: American Spirit and Master Distiller Tournament. The new Moonshiners series will feature Tim and Howard traveling across the United States to rediscover lost liquors. In the new Master Distiller show, top champions will compete against one another.

Discovery Channel revealed the following about the shows in a press release.

“The Moonshiners are ready to give viewers quite the spirited history lesson! In an all-new spinoff series, MOONSHINERS: AMERICAN SPIRIT, the Moonshiners venture out on a fun-filled search for the legendary lost liquors of America’s past… and learn a thing or two about our nation’s history along the way. They’re on a mission to keep American spirits alive and will leave no liquor (or history lesson) behind! MOONSHINERS: AMERICAN SPIRIT premieres Wednesday, April 13 at 8pm ET/PT on Discovery.

Each week, Moonshiners Tim and Howard will travel across the US to rediscover legendary liquors that have been lost to time. Unearthing dusty bottles and hidden recipes, they’ll rebuild ancient pot stills with fellow Moonshiner, Tickle, and recreate secret mash bills in a bold attempt to taste American spirits that would otherwise be lost to history.

With each episode focused on a single libation – from Benjamin Franklin’s liquor in Philly to Franklin Roosevelt’s secret moonshine in Georgia – together the Moonshiners will learn about the origins of each spirit and its place in the history books. This is history like you’ve never… tasted!

What do you think? Do you plan to watch these two new liquor shows on Discovery Channel?