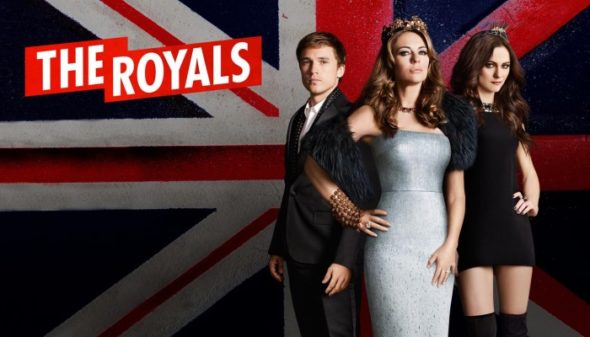 “Cheers!” E! has released a new preview and the premiere date for season four of The Royals.

The scripted drama revolves around a fictional British royal family in modern day London. They inhabit a world of opulence that caters to their every desire, but one that also comes with a price tag of duty, destiny, and intense public scrutiny. The cast includes Elizabeth Hurley, William Moseley, Alexandra Park, Jake Maskall, Tom Austen, Max Brown, and Jules Knight.

Los Angeles, CA – December 28, 2017 – E! turns up the drama and mystery when the fourth season of “The Royals”, co-produced by Lionsgate and Universal Cable Productions, premieres Sunday, March 11 at 10pm ET/PT. The 10 episode one-hour season involves unexpected twists and intriguing complexities, revealing the intricacies faced by royals trying to maintain high-profile relationships under scrutiny, and continuing to shine a light on the anarchy in the monarchy.

The fourth season of “The Royals” picks up after the charming, potentially duplicitous, Prince Robert (Max Brown) is crowned King of England. Prince Liam (William Moseley) and his recently dethroned uncle Cyrus (Jake Maskall) form an unlikely alliance, Queen Helena (Elizabeth Hurley) struggles to control her unruly brood as she figures out her role in the palace. And, after a heated on again-off again relationship, bodyguard Jasper (Tom Austen) tries to capture Princess Eleanor’s (Alexandra Park) heart one more time just as they are about to face their biggest obstacle yet. The series also stars Genevieve Gaunt as Wilhelmina. From Lionsgate and UCP, “The Royals” is executive produced by Brian Robbins, Joe Davola (“One Tree Hill,” “Smallville”), and Shauna Phelan.

“The Royal Hangover,” the digital companion series to the scripted program, will also return on March 11.”

What do you think? Do you watch The Royals? Are you excited for season four?

Where can I find the Royals? My Local cable has an E! channel but, n9 Royals Royals.
Please share the schedule for release of the Royals. I am especially interested in the treatment of Merritt of Patterson as I think she got a raw deal in Season 1.

Here, here you tell them bro. Sometimes I think I can do a better job or at least add a fresh perspective to the script. I am a published author after all.

PS Nejc, according to TV guide USA, Merritt Patterson a.k.a. Ophelia will appear jn season 4 multiple times. Dates and time are cited on line, but I have found it to sometimes be unreliable.
If the trailer is a fair representation, Merritt Has done a dynamite job in the movie for the Big screen “Unbroken: Road to Redemption” to be releasesd Oct 5th.

I cannot Wait Until March! I Love The Royals! I DON’t Like Robert Character At All!

I can’t wait for the return of the Royals, absolutely love this show..

Very excited The Royals is returning — there were too many cliff hangers for those of us who love this show! Wooooooooooooooo-hooooooooooo!