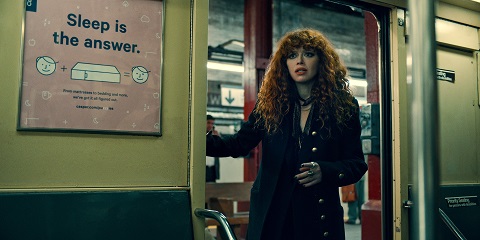 The second season of Russian Doll has a premiere date. Starring Natasha Lyonne, Greta Lee, Yul Vazquez, Elizabeth Ashley, Charlie Barnett, Chloë Sevigny, Dascha Polanco, Brendan Sexton III, Rebecca Henderson, Jeremy Bobb, Ritesh Rajan, and Jocelyn Bioh, the first season of the Netflix comedy-drama series followed a woman stuck in her own version of Groundhog Day, as she relived her birthday over and over again. Season one was released in 2019.

Netflix revealed the following about the plot of season two:

“Set four years after Nadia (Natasha Lyonne) and Alan (Charlie Barnett) escaped mortality’s time loop together, season two of Russian Doll will continue to explore existential thematics through an often humorous and sci-fi lens. Discovering a fate even worse than endless death, this season finds Nadia and Alan delving deeper into their pasts through an unexpected time portal located in one of Manhattan’s most notorious locations. At first they experience this as an ever-expanding, era-spanning, intergenerational adventure but they soon discover this extraordinary event might be more than they bargained for and, together, must search for a way out.

Russian Doll returns on April 20th. Check out the preview for season two below.

What do you think? Are you excited about the return of Russian Doll on Netflix?