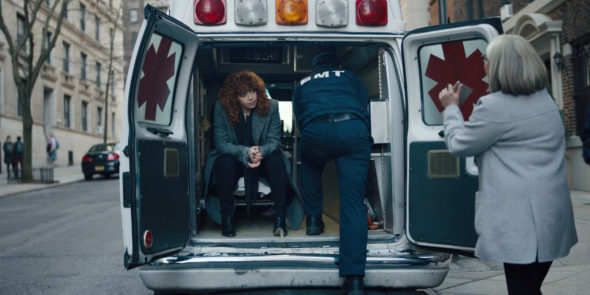 Is Nadia still stuck in a loop? Has the Russian Doll TV show been cancelled or renewed for a second season on Netflix? The television vulture is watching all the latest TV cancellation and renewal news, so this page is the place to track the status of Russian Doll, season two. Bookmark it, or subscribe for the latest updates. Remember, the television vulture is watching your shows. Are you?

Unless they decide to publicize viewership, it is difficult to predict whether Netflix will cancel or renew Russian Doll for season two. For now, I’ll keep an eye on the trades and press releases and update this page with breaking developments. Subscribe for free Russian Doll cancellation or renewal alerts.

6/11/19 update: Netflix has renewed Russian Doll for a second season.

What do you think? Are you glad that the Russian Doll TV show has been renewed for a second season? How would you feel if Netflix had cancelled this TV series, instead?

I love this show. From the first episode, I found this series to be hilarious and very different. You just don’t know what to expect! Highly recommend and looking forward to Season 2.

I loved the series. Unique and I really enjoyed all the stars. I binged watched all in a few days, which is unusual for me. It truly kept my interest.

Been done before ,no original story lines anymore.

We loved Natasha Lyonne in Orange is The New Black and Love. Love, Love, her in her new series Russian Dolls. Looking forward to a lot more seasons! Best new series for us to get wrapped up in!