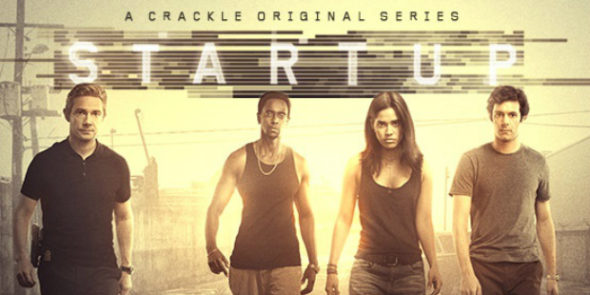 TV show description:
From creator Ben Ketai, the StartUp TV show tells the story of the emergence of GenCoin, a new cryptocurrency. While alternative digital money is already a controversial idea, GenCoin also has the dubious distinction of germinating on the “wrong side of the tracks,” thanks to three unknowns who are hardly typical tech engineers.

The drama centers on FBI agent Phil Rask (Freeman). Jaded and corrupt, Rask is out to get what he believes he is owed. Soon, he comes across financier Nick Talman (Brody), who works for a small, elite Miami firm.

Despite his success, Nick has a complex relationship with his rich, reckless father. When the elder Talman vanishes, instead of contacting the FBI, Nick invests his dad’s extralegal profits in Izzy Morales’ new tech start-up.

A bona fide tech genius, Izzy wants to change the world. She ends up partnering with Nick, and by default, Ronald Dacey (Gathegi).

When Ronald, a lieutenant in the local Haitian gang, realizes his money disappeared along with Nick’s father — he pursues the only avenue left to him — Nick. The men ally themselves with Izzy, which lands the whole trio in Rask’s sights. How low will he go to take them down? Stay tuned.

What do you think? Do you like the StartUp TV series? Should this TV show be cancelled or renewed for another season on Crackle?

This show deserves more seasons. It’s almost on par with shows like Animal Kingdom and Ozark. Fans of those shows will love StartUp

Fantastic show. I Binged watched all three seasons. Plot and Acting were amazing. Please have a Season 4…

Absolutely Amazing show all the actors are perfect for their roles . I personally get very into certain things I watch and I have gotten so into this show I cried along every character and felt every serious moment of every twist and turn . PLEASE DO NOT CANCEL I DEFINITELY TRULY WISH TO SEE MORE

Bloody awesome series. I was totally hooked. Hopefully season 4 is in the future.

i m almost done season 3 of Startup. Please tell me u will finish the series. Don’t leave me hanging.

Brilliant series,brilliant acting by all the cast.

The most amazingly original show, please continue majority of the British population watch this show. The acting superb, story awesome and the locked in viewing is superb please return season 4

Just caught up with Season 3.

AWESOME and even better without Martin Freeman.

It’s a truly enthralling show that is not being pushed hard enough by Sony/Crackle.