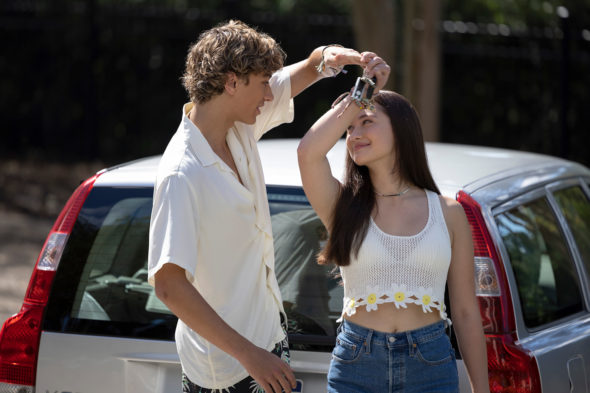 The Summer I Turned Pretty is set to premiere on Prime Video next week, and the streaming service has already given the drama series an early renewal for season two.

Starring Lola Tung, Jackie Chung, Rachel Blanchard, Christopher Briney, Gavin Casalegno, Sean Kaufman, Alfredo Narciso, and Minnie Mills, the series is based on the novel by Jenny Han. It tells the story of a girl who finds herself caught between two brothers during her summer vacation.

Prime Video revealed more about the series and its renewal in a press release.

Prime Video announced today it has ordered a second season of The Summer I Turned Pretty, ahead of the series’ anticipated Season One premiere. Season One will exclusively stream on Prime Video in more than 240 countries and territories worldwide on June 17. The series adaptation from best-selling author Jenny Han is a co-production of Amazon Studios and wiip.

“When I decided to adapt Summer for television, I knew we’d need more than one season to honor the story we are telling,” said Jenny Han. “To receive a second season pickup ahead of the premiere of Season One is beyond my wildest dreams. I am so grateful to Amazon Studios for this amazing vote of confidence in our show, and cannot wait to bring our incredible team back together to tell the next chapter in our story.”

“The wait is almost over until audiences around the world can experience Jenny Han’s extraordinary style of storytelling come to life on screen, as her new and longtime fans alike share our excitement for Season One of The Summer I Turned Pretty to make its global debut,” said Paul Lee, CEO wiip. “We’re incredibly excited to continue on this journey with Jenny and the talented team at Amazon to make Season Two of this beloved young adult series.”

“As fans anticipate the beach fun and young romance in the upcoming first season, we’re excited to announce more summer to come with a second season of The Summer I Turned Pretty,” said Vernon Sanders, head of global television, Amazon Studios. “We look forward to our Prime Video customers returning to Cousins Beach with Jenny Han and her characters as they continue their coming-of-age journeys for another season.”

The Summer I Turned Pretty is a multigenerational drama that hinges on a love triangle between one girl and two brothers, the ever-evolving relationship between mothers and their children, and the enduring power of strong female friendship. It is a coming-of-age story about first love, first heartbreak, and the magic of that one perfect summer.

Season Two of The Summer I Turned Pretty is led by showrunners Jenny Han and Sarah Kucserka . Han, Kucserka, Karen Rosenfelt, and Gabrielle Stanton serve as executive producers, along with Hope Hartman, Mads Hansen, and Paul Lee for wiip.

Jenny Han is the #1 New York Times best-selling author of the To All the Boys I’ve Loved Before and The Summer I Turned Pretty series. Her books have been published in more than 30 languages. For television, she has created two new series based on these books – Prime Video’s forthcoming The Summer I Turned Pretty, which she executive produces and co-showruns, and the recently announced Netflix series XO, Kitty, a spinoff of the To All The Boys universe, which she will also executive produce and co-showrun. For film, she executive produced all three films in Netflix’s global hit To All The Boys trilogy. She lives in Brooklyn, New York.

What do you think? Are you excited to see The Summer I Turned Pretty on Prime Video?