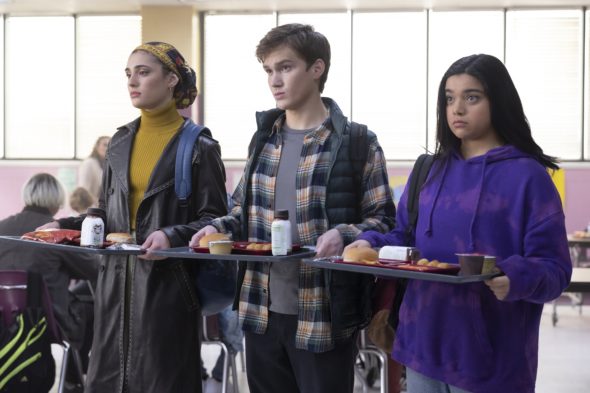 Is having superpowers as good as it seems? Has the Ms. Marvel TV show been cancelled or renewed for a second season on Disney+? The television vulture is watching all the latest cancellation and renewal news, so this page is the place to track the status of Ms. Marvel, season two. Bookmark it, or subscribe for the latest updates. Remember, the television vulture is watching your shows. Are you?

Streaming on the Disney+ subscription service, the Ms. Marvel TV show revolves around a character that first appeared in Marvel comics in 2013. The show stars Iman Vellani, Matt Lintz, Yasmeen Fletcher, Zenobia Shroff, Mohan Kapur, Saagar Shaikh, Rish Shah, Fawad Khan, Laurel Marsden, Arian Moayed, Adaku Ononogbo, Alysia Reiner, Azhar Usman, Laith Nakli, Nimra Bucha and Travina Springer, with Aramis Knight. The story revolves around Kamala Khan (Vellani), a 16-year-old Muslim-American who’s growing up in Jersey City. An avid gamer and a voracious writer of fan-fiction, Kamala is a superhero and Avengers megafan with an oversized imagination — particularly when it comes to Carol Danvers aka Captain Marvel. Kamala struggles to fit in at school and sometimes, even in her own home. Things change when she gains superpowers like the heroes she’s always looked up to. Kamala gains the ability to harness cosmic energy and create constructs from a magical bangle.

Will Disney+ cancel or renew Ms. Marvel for season two? It’s well-known that this show is a precursor to the 2023 feature film, The Marvels. While most Marvel Cinematic Universe (MCU) TV shows conclude after one season, it’s possible that this one could return. A filming wrap gift for the cast and crew featured the show’s logo along with text that reads “Season 1”. That could be an indication that there are plans for a second season. I’ll keep my ears open and an eye out for news, and will update this page with breaking developments. Subscribe for free alerts on Ms. Marvel cancellation or renewal news.

What do you think? Do you hope that the Ms. Marvel TV show will be renewed for a second season? How would you feel if Disney+ ended this TV series, instead?

I was bored with how lost she is

I watched the first episode and liked it a lot. It’s a bit too early to say how it’s going to go, but the characters were very likeable so far. I’m not familiar with the comics so I can’t compare with them. BTW, I’m probably not in the viewer demographic anyway (68 yr old male).