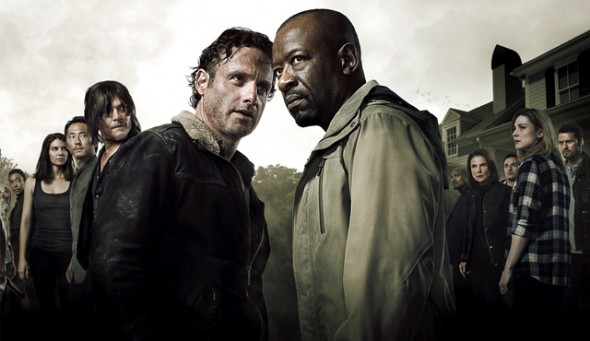 AMC has announced that the sixth season of their hugely-popular series The Walking Dead will kick off on Sunday, October 11th, with a special 90-minute episode.

International Premieres of “The Walking Dead” Season Six to Air Within 24 Hours of U.S. Broadcast Across All FOX International Channels Markets

SAN DIEGO, CA – July 10, 2015 – AMC announced today from Comic-Con International that “The Walking Dead” season six will premiere Sunday, October 11th at 9:00 p.m. ET/PT with an extended 90-minute episode. As in previous seasons, the show’s sixth season of 16 episodes will air in two parts, with the first eight episodes kicking off October 11th and the final eight returning February 2016. Following “The Walking Dead” will be the season premiere of AMC’s “Talking Dead,” hosted by Chris Hardwick (Nerdist), at 10:30 p.m. ET/PT. A new season of “Comic Book Men” will debut the following week with two back-to-back episodes on Sunday, October 18 at midnight and 12:30 a.m. ET/PT. Internationally, “The Walking Dead” will return to audiences in 125+ FOX International Channels (FIC) markets within 24 hours of the U.S. premiere, as part of FIC’s continued commitment to broadcast the series near day-and-date globally.

Today at 12:00 p.m. is AMC’s “The Walking Dead” Comic-Con panel event, moderated by Hardwick, and the season six trailer premiere in Hall H. Following the event, the trailer can be viewed at www.amc.com. At AMC’s “The Walking Dead” booth (#4237), fans can stop by to take photos of themselves among some of the iconic settings from season five, including the infamous revolving door in which Glenn and Noah were stuck and Noah met his demise.

Also today from 7:15-9:00 p.m. in Hall H, Kevin Smith will discuss the fifth season of “Comic Book Men,” for which he serves as executive producer, during his annual Comic-Con panel.

In addition, AMC announced a “Talking Dead Season 6 Preview Special,” which will premiere Sunday, August 23rd at 8:00 p.m. ET/PT. Hosted by Hardwick, the special will give fans an early look at what to expect in the upcoming season of “The Walking Dead,” along with exclusive interviews with cast members and executive producers and behind-the-scenes moments. Fans can also catch up on seasons one through five with a “5 Sundays/5 Seasons” Marathon. Each Sunday, AMC will air a single season of the critically acclaimed hit beginning Sunday, July 26 at 2:30 p.m. ET/PT through Sunday, August 23.

The network also announced today “The Walking Dead” season six premiere event at Madison Square Garden in New York City this October. The cast and executive producers will be on hand for a screening and panel discussion at The World’s Most Famous Arena. For more information, visit www.amcthewalkingdead.com and sign up to be among the first to learn how to win tickets to attend.

“We covet our time in person with ‘The Walking Dead’ fans every summer at Comic-Con International, and we always work to bring them new, exciting content and experiences that fuel their passion,” said Charlie Collier, AMC and SundanceTV president. “With today’s exclusive trailer, the upcoming preview special in August, the unprecedented fan celebration at Madison Square Garden, and so much more in store between now and the 90-minute premiere on October 11th, we are focused on ‘The Walking Dead’s’ passionate, loyal audiences and helping them bridge the months-long separation from Rick, Daryl, Michonne and the rest of the gang.”

ABOUT “THE WALKING DEAD”

Based on the comic book series written by Robert Kirkman and published by Image Comics, “The Walking Dead” reigns as television’s most watched drama for adults 18-49. “The Walking Dead” tells the story of the months and years that follow after a zombie apocalypse, and follows a group of survivors, led by police officer Rick Grimes, who travel in search of a safe and secure home. The series, which has been heralded by critics as “an honest-to-God phenomenon” (Variety), “relentless and provocative” (Orlando Sentinel) and “brilliantly engaging” (TheHollywoodNews.com), stars Andrew Lincoln as Rick Grimes; Steven Yeun as Glenn; Norman Reedus as Daryl Dixon; Chandler Riggs as Carl; Lauren Cohan as Maggie; Danai Gurira as Michonne; Melissa McBride as Carol; Sonequa-Martin Green as Sasha; and Michael Cudlitz as Abraham. The series is executive produced by Scott M. Gimple, Kirkman, Gale Anne Hurd, David Alpert, Greg Nicotero and Tom Luse.

“Talking Dead” is AMC’s first live after show that serves as a platform for discussion for “The Walking Dead.” Produced by Embassy Row and executive produced by Michael Davies, Jennifer Kelly Patton and Brandon Monk, “Talking Dead” features host Chris Hardwick spending time with fans, actors, producers and TV enthusiasts, recapping the most recent “Dead” episode, providing sneak peeks and discussion of upcoming episodes and taking questions and comments from viewers. Fans may continue to engage with the after-show following the on-air conclusion, online, at AMC.com for more conversations, questions and trivia.

“Comic Book Men” dives deep into fanboy culture by following the antics in and around master fanboy Smith’s New Jersey comic shop, Jay and Silent Bob’s Secret Stash. Leading the crew behind the Secret Stash counter are Walt, Mike, Brian and Ming, who geek out over mind-blowing pop culture artifacts and the legends behind them. Whether it’s about buying and selling memorabilia or embarking on wild adventures away from the store, the men of The Stash share all the juicy details with Kevin through their hilarious podcast, which is woven throughout the series.

Whether commemorating favorite films from every genre and decade, or creating acclaimed original programming, AMC brings to its audience something deeper, something richer, Something More. The network reigns as the only cable network in history ever to win the Emmy(R) Award for Outstanding Drama Series four years in a row with “Mad Men,” and six of the last seven with current back-to-back honoree, “Breaking Bad.” The network boasts the most-watched drama series in basic cable history and the number one show on television among adults 18-49 for the last three years with “The Walking Dead.” AMC’s current original drama series include “Mad Men,” “The Walking Dead,” “Better Call Saul,” “Hell on Wheels,” “TURN: Washington’s Spies,” “Halt and Catch Fire,” “Humans,” and the forthcoming “Fear the Walking Dead,” “Into the Badlands” and “The Night Manager.” AMC also explores authentic worlds and discussion with original shows like “Talking Dead,” “The Making of The Mob: New York” and “Comic Book Men.” AMC is owned and operated by AMC Networks Inc. and its sister networks include IFC, SundanceTV, BBC America and WE tv. AMC is available across all platforms, including on-air, online, on demand and mobile. AMC: Something More.

FOX International Channels (FIC) is 21st Century FOX’s international multi-media business. We develop, produce and distribute 300+ wholly- and majority-owned entertainment, sports, factual and movie channels in 45 languages across Latin America, Europe, Asia and Africa. FIC’s core channel brands include FOX, FOX Sports, FOX Life and National Geographic Channel. FIC’s movie channels include FOX Movies, FOX Movies Premium, Star Chinese Movies and Moviecity. Our non-linear brands include FOX Play and Nat Geo Play. These networks and their related mobile, non-linear and high- definition extensions, reach over 1.825 billion cumulative households worldwide. FIC is dedicated to delivering high quality US content to its global viewers. We acquire, develop, produce and co-produce scripted and non-scripted programming for our linear and digital platforms including the Golden Globes nominated hit series The Walking Dead, The Bridge and Wayward Pines. In the past five years FIC pioneered a global release strategy and is the first and only international TV company to release TV series in 125 countries at the same time as the US. In addition FIC owns and operates two production studios that produce hundreds of local programming hours for its wholly owned channels and third parties. In operation since: August 14, 1993.

What do you think? Will you be tuning in to watched the sixth season premiere “live”?

I just can’t wait. I hate waiting until October

I love this show, too, and I’ve seen all the episodes more than once…yes, really.
Carol has always been a favorite of mine because of her “growth,” & strength. I always feel terrible when someone is killed off, too. Especially Dale! Hope this shows gets renewed for yrs.

I just hope they keep this program running until I go to my just reward, hopefully not by one of the walking dead characters. The characters on this program have really been fleshed out so that you actually can relate to them whether they are mostly good or mostly evil. Well written program, and even though it can get a little bloody at times, It is a struggle for people to stay alive though a hellish nightmare of a life. I have watched almost every episode for the past few years, and just enjoy seeing how they cope with all… Read more »