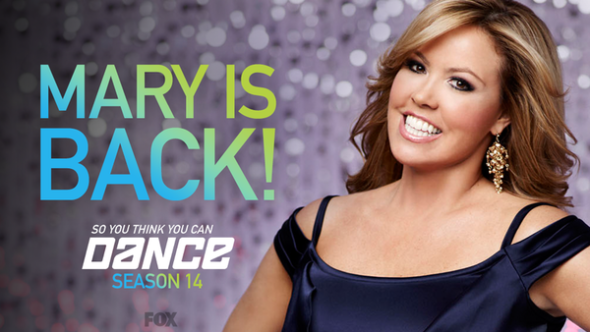 In an effort to boost viewership, the 13th season of So You Think You Can Dance shook up its format and featured dancers between the ages of eight and 13. Still, the FOX dance competition dropped even further in the ratings. This season, it is returning to basics with dancers ages 18-30. They’ve also brought back Mary Murphy and added Vanessa Hudgens, who will judge the competition along with co-creator Nigel Lythgoe. Will this do the trick? Cancelled or renewed for season 15? Stay tuned.

Hosted by Cat Deeley, So You Think You Can Dance pits dancers against one another, in a bid to become “America’s Favorite Dancer.” This season, the FOX contestants will demonstrate their ability in various dance styles, including contemporary, tap, hip-hop, ballroom, animation, breaking, and more. The Top 10 will then be paired up with All-Stars who will guide them throughout the competition. **Status update below..

9/26 update: You can see the rest of the latest night’s ratings.

For comparisons: The 13th season of So You Think You Can Dance averaged a 0.77 rating in the 18-49 demographic and 2.941 million total viewers.

What do you think? Do you still like the So You Think You Can Dance TV show? Should it be cancelled or renewed for a 15th season on FOX?

This is my favorite show. I love the dancing. The contestants and choreography continue to get better and better. I prefer a format that has contestants dancing with an All-star based on the dance style and the All stars’ specialty. This allows for better performances, focus on the contestants and we still get to see favorites from previous seasons.

Love this show and feel like this has been one of the better seasons. I like the format but it has been a while since we have had a good 3rd judge. We miss C. Applegate!

I LOVE the show. The show is entertaining and the talent is phenomenal! I hope it gets renewed…

I don’t like shows like this. I’m sixty year old male. I like the judge’s but they should be a little more critical. The coaches sometimes are not that good. I look forward to the show every week. I’ve ended up with a lot of physical problems I never thought I would have. I love to see the young people dance.

The people who don’t like the all stars are missing the incredibly value they bring. Each contestant gets to spent time working with a real pro on a continuous basis, which has raised the bar on the quality of the dances. This is without a doubt the best approach! I hope the shows continues for many more years and this format is retained.

Please make it go away… glitz with no substance. 10 all-stars from day 1? You kidding?? Bring back season 11’s format!!!!

I’m a diehard SYTYCD fan and have watched every season religiously (except for the last one–I just couldn’t abide watching dancing children, good as they might have been). I’m really, really enjoying season 14 so far, and I’m so glad that Mary’s back! The level of talent seems higher than ever this year. Really hope that it’s renewed for another season!!!

This is my favorite show EVER!! I am an adult who has watched this from season 1 but I do DVR because my husband goes to bed early and I watch the next day!

Thank goodness for DVR and the FAST FORWARD BUTTON. Seems like there are only a few minutes of actual dancing shown. Big disappointment. I certainly don’t miss having to push the MUTE button when Mary shrieks. This show WAS an inspiration to young ones to learn dance.

This should be the last season, there making it about the all stars, what arrogance, when 20 people talented people should had been put through without the all stars, their dragging the show into a ditch, last season didn’t work, why didn’t they continue with the original format who that made all stars, one of their all stars got cut from the show World of Dance, so that should tell you, these dancers are not all stars, maybe for this show, ratings are dropping, so cancel, wish they would now, replace with reruns or something new

I love the All Stars and I love SYTYCD and hope it never goes off!

SYTYCD is the best show on television. The talent, the hosting, the judges, the amazing choreography, the dedication on every level for the show is amazing. Please keep it indefinitely!!!!!

So glad Mary is back. Also really like Vanessa Hudgens as a judge. She is a very compassionate soul. Great team with Nigel.

Really enjoying this season but hope you will go back to original format!! This show needs to stay on the air!!! Thank you!!!!

There aren’t the correct ratings you have up there. Those are the ratings for MasterChef.

Thanks for the catch!

I do not like season 14 at all ! I do not like the new judge vanessa , Mary Murphy is laughing all the time and it is annoying !!!! They late somenot good dancers get through who just shake their ass and it has a ghetto feeling today during this second show of the season ! I miss the other judges , I miss the guy who are more decent . SYTYCD I think that could be your last season .
I lived season 13 with the kuds , I can not believe it did not do well ?!

Soooooo glad Mary is back. She’s a much better judge that a lot of those replacements they’ve had on. I’m also glad they’re not doing the show w/all those kids. Who wants to watch some child get rejected then start to cry? That’s just wrong.

I agree about all that you said. I was so happy to get Mary & the old format back! Thanks Nigel for listening to all the fans that left the past couple of years. I have been passing around the word to people to come back!

There is no old format back ! They had real dancers and choregraphes as judges and not a puppet who hit on the guys .