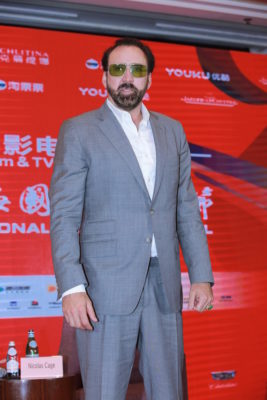 Nicolas Cage is coming to the small screen. Variety reports the Oscar-winning actor will star in an upcoming TV show based on the Netflix docuseries Tiger King.

From CBS TV Studios and Imagine, the scripted drama “centers around Joe Schreibvogel, a.k.a Joe Exotic, an eccentric, exotic zookeeper in Oklahoma who fights to keep his park even at the risk of losing his sanity. The series will live in the lion’s den with Joe, explore how he became Joe Exotic, and how he lost himself to a character of his own creation.”

Cage will play the titular Tiger King, aka Joe Exotic, in the upcoming TV show. A network has not yet been named, but eight episodes have been ordered. Dan Lagana will serve as showrunner.

What do you think? Have you seen Tiger King? Will you watch the scripted series?

Yes! I love Nicolas Cage and the Tiger King was like a train wreck, couldn’t take my eyes off it so I’m sure this will be entertaining also

WHY??? do we REALLY need yet another story of this moronic person ? i worry about our culture ,because of the fascination with such TERRIBLE stories / people, this is one of the worst examples of “real” people ever