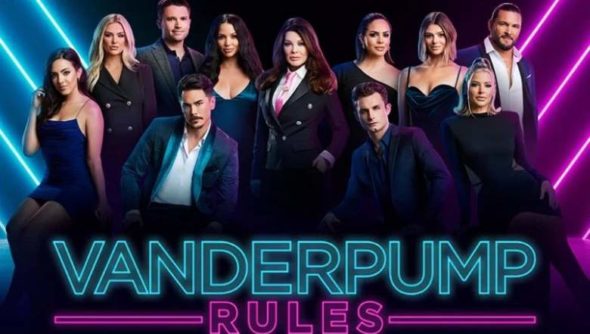 Bravo revealed more about the return of Vanderpump Rules in a press release.

“As one of LA’s most successful restaurateurs, Lisa Vanderpump spent the pandemic keeping her many businesses afloat. With her restaurants finally reopened, she continues to serve as a mentor and mother figure for many of her employees, both current and former.

After working at TomTom alongside boss and mentor Lisa, Tom Sandoval and Tom Schwartz have come up with the concept for their own bar and have spent the last few months seeking financing, working with a designer, and creating the cocktail menu of their dreams. When Katie Maloney- Schwartz’s input clashes with Sandoval’s beloved ideas, Schwartz must decide which of his life partners to support and which to leave out in the cold.

With a brand new baby girl and the relationship she has always wanted, Scheana Shay appears to have it all. But when her fiancé and child’s father, Brock Davies reveals a startling truth about his past, Scheana’s friends start to question whether he’s truly the fairytale prince of her dreams.

Independence has always come naturally to Ariana Madix, who has funneled her energy into working on her own professional projects during quarantine. She finds herself caught in the middle of the drama when Sandoval’s outsized opinions put him at odds with the rest of the group.

A new working mom, Lala Kent is busy promoting her new book, working on her makeup company, and managing the staff of her house. Friendships are put to the test when she finds herself at odds with Scheana and Ariana.

With nearly two years of sobriety under his belt, James Kennedy is doing better than ever – his music career is skyrocketing and he’s planning to propose to the love of his life, Raquel Leviss. But sobriety hasn’t cured all of James’ demons and when he continues to struggle with controlling his emotions, the group worries that Raquel might be marrying into a nightmare.

In addition to working at SUR, Charli Burnett is studying to be an aesthetician. Friendship means the world to her and she has become extremely close to Scheana and Raquel. She even puts her modeling skills to the test to help raise money for a friend’s botched plastic surgery. But questions about loyalty arise when one of her closest friends fails to take her side.

Check out a preview for the new season of Vanderpump Rules below.

What do you think? Are you excited to see the new season of this Bravo reality series later this month?