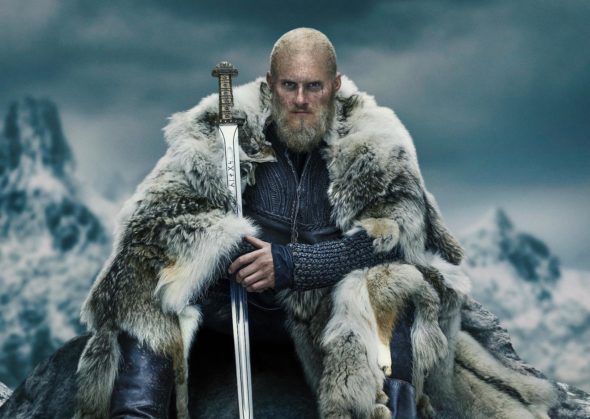 Vikings is coming back! The premiere date for the sixth and final season has been revealed, and fans now have their first look at the drama ahead with a new trailer teaser.

History released the new trailer for season six of Vikings on Monday. The season premiere will be a special two-hour event airing on December 4 at 9 PM. Fans will see 10 episodes for the first half of season six with the second half of the 20 episode season being released later in 2020.

“HISTORY’s hit drama series Vikings returns for its sixth and final season with a highly anticipated and powerful two-hour premiere kicking off Wednesday, December 4 at 9 PM ET/PT. For the past five seasons the Vikings have explored and conquered the known world, from early raids in England and the fierce battles of the Great Heathen Army to the heart-stopping death of Ragnar (Travis Fimmel), now the epic saga sails to monumental lengths throughout 20 compelling, definitive episodes.

The 20-episode sixth season will air in two parts, beginning with a two-hour premiere on Wednesday, December 4 at 9PM ET/PT followed by eight episodes airing every Wednesday at 10PM ET/PT on HISTORY. The remaining ten episodes of season six are slated to air in 2020. Additionally, series regular Katheryn Winnick is set to helm one episode in season six, marking her directorial debut. Last season, HISTORY’s first scripted series Vikings reached 25.2 million total viewers in Live+7 delivery and is the network’s #1 drama series.

“I always knew how Vikings would end and, after 89 episodes, I truly believe the saga of Ragnar Lothbrok and his sons has been told and we are leaving our beloved fans with the proper and definitive ending they so deserve,” said Michael Hirst, creator, writer and executive producer. “Although it is bittersweet there are still 20 episodes left and the most ambitious and intensely emotional episodes are still to come.”

Revenge, drama and chaos closed out the mid-season five finale. Ivar the Boneless (Alex Høgh Andersen), a self-proclaimed God ruling over Kattegat with alarming terror, charged his army into battle against his enemy and brother Bjorn Ironside (Alexander Ludwig). Unleashing a fiery guerilla warfare, the two brothers refused to surrender – blood, pride and the crown weighed too heavily on both of their shoulders. In the final moments, Ivar was forced to flee an imminent fate, disappearing into the darkness and securing Bjorn’s victory. Lagertha (Katheryn Winnick), reborn after experiencing severe delusions from the major love she’s lost, emerged to crown Bjorn as the new rightful king.

Season six returns following the battle between brothers which has left Bjorn victorious and a hero to the people who have been under the tyrannical rule of Ivar for so long. As the new leader of Kattegat, Bjorn struggles to fill his late father’s shoes as king, while facing several dilemmas and wrestling with the idea that power overshadows morals. Meanwhile, Ivar, searching for a new path to separate him from his past, is seen traveling along The Silk Road eventually leading him to Russia. He meets his match in Prince Oleg (Danila Kozlovsky), a ruthless and unpredictable Russian ruler, who shocks even Ivar with his merciless actions. While Lagertha has her own agenda – to live a quieter and less public life on her own farm, but new dangers lurk close to home. This season, the Vikings continue to take over Scandinavia as Ubbe (Jordan Patrick Smith) and Torvi (Georgia Hirst) travel to Iceland to uncover the mystery circling around Floki’s (Gustaf Skarsgård) disappearance and Hvitserk (Marco Ilsø) pursues his personal vendetta against Ivar.”

What do you think? Are you excited for the return of Vikings? Will you watch season six?

Please don’t cancel the show . Everyone loves it. Don’t let Bjorn die . We already lost Ragnar and lagertha we don’t need to loose him ..

Bobby B
Reply to  Tracy reynolds

But they did 🙁 everybody dies

I am so excited to see Season 6 of Vikings! I absolutely love the show and the actors!! Hoping the series finale finds Lagertha living out her life in peace and contentment…she has certainly earned it!!

stan
Reply to  Sharon in Kansas